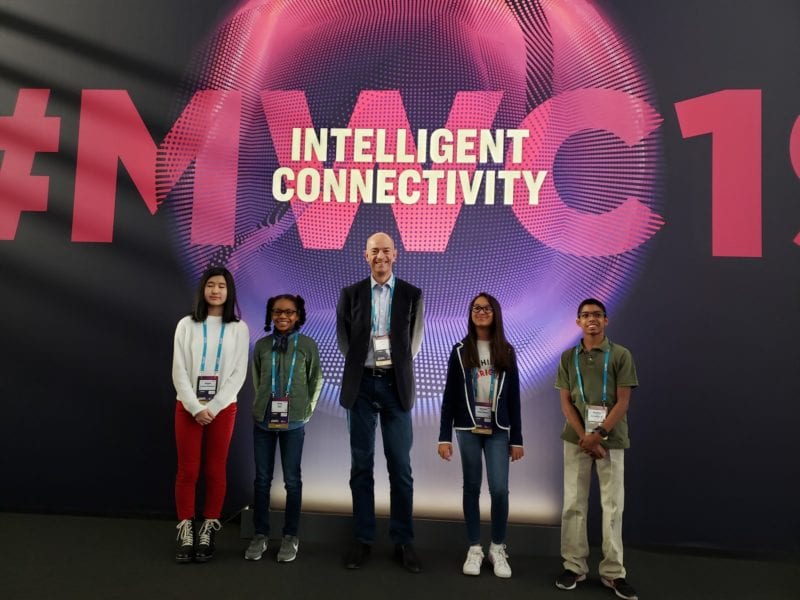 Young entrepreneurs who spoke during the morning keynote on day 3 of Mobile World Congress 2019 in Barcelona. Photo: Simon Segars

The kids were more than all right at Mobile World Congress (MWC) Barcelona, as four speakers with a combined age of less than 60 made a lasting impression on the audience of the event’s day-three morning conference session.

Emma Yang, a 15-year-old entrepreneur from New York City, is the creator of an app called Timeless, which was inspired when her grandmother started to suffer Alzheimers. Yang created Timeless as a way of helping people suffering from the disease. She believes the technology is a great tool for expanding on healthcare. “Technology can help us reach more and more people,” said Yang. “For me, I am exciting about the possibilities of 5G. Innovations like 5G can help us cover areas where are not currently serving. It doesn’t have to always be about the new Instagram.”

One of the most impressive speakers was Reuben Paul, the 13–year-old and founder and CEO of CyberShaolin, providing thought leadership on cybersecurity. Paul told a story about how he once hacked a smart teddy bear and was able to turn it into a remote surveillance device. He spoke about how the younger generation views technology. “We try to create things that we want. We are very prone to emojis. In the past, we had to change to technology, now we are creating the technology for us,” he said, adding that he wants the world to be a more cybersecure place.

One way to potentially get young kids into space technology is get them into computer programming and Artificial Intelligence (AI). Samaira Mehta, 10 years old and the creator of a board game “CoderBunnyz,” aims to teach kids to learn about code in a fun way. She said she believes it easier to get kids to code once they have learned concepts in a board game. Mehta has also invented an AI board game, CoderMindz. At MWC, she conveyed a very powerful message to about the role of young people in tech. “You are part of my future, and I will be a part of your future. We have adapted to technology — we now need technology to adapt to us.”

A number of internet and telecoms influencers took to the stage later in the day to talk about the future of 5G. The consensus message seems to be that with the worlds of AI, Machine Learning (ML), and cloud computing aligning, the momentum behind 5G is almost irresistible. One of the most interesting speakers this morning was Mickey Mikitani, Chief Executive Officer (CEO) of Japanese technology company Rakutan (which also sponsors Barcelona’s historic soccer club). Rakutan is taking a very interesting approach to 5G, which will see it get into the mobile connectivity business.

Mikitani outlined his vision of the future. “We will have a totally new approach to building a telecoms network. It will take place in the cloud. We are building the first end-to-end fully virtualized, cloud based 5G network. New services can be deployed in a very nimble manner. We don’t have specialized hardware. Everything is software and virtualized and put in the cloud,” he said.

Mikitani explained that Rakutan’s network will be 5G-ready from day one, and will be easy to manage. The network’s costs will be much lower than traditional telecoms companies. If hardware malfunctions, the network can adapt and assign work to other hardware  automatically. “The mobile network has always been a mystery to me,” said Mikitani. “I don’t know how they created their core system. It looks like spaghetti to me. Our philosophy is completely different. We are providing a total new concept for a mobile network.”

One of the world’s biggest network technology companies, Cisco, hopes to play a pivotal role in enabling 5G services. Cisco CEO Chuck Robbins told audience members that 5G was one technology where the hype is going to be reflected in reality. “We believe that in 2022, there will be more traffic created than in that year, than there has been created in all the years up to now on the Internet,” he said. “The 5G connections will generate six times the amount of traffic your mobile devices are generating. The number one killer app is my 17-year-old son turning his phone into a hotspot and 17 of his friends playing Fortnite. The impact to industries such as mining, manufacturing, transportation will be huge. 5G in this next wave will open up a world of opportunity to help people all over the world.”

He gave an example of how 5G-enabled services can make a very real difference people. He talked of how Cisco was working with mental health organizations in Canada to bring better services to people across the nation, and how it will enable companies to provide services in previously unserved regions — a similar modus operandi to regional and global satellite operators. What will this mean if 5G connections suddenly become ubiquitous?

Etisalat International CEO Hatem Dowidar said that telcos will not be over-charged for 5G spectrum before they can offer services — a common theme of at MWC this week. “Spectrum was sold at crazy prices at 3G,” he said. “Regulators and government — please don’t get too greedy. 5G requires much more spectrum. But, we also need to work on existing technologies as well as 5G.”

Telstra CEO Andrew Penn asserted that 5G is arriving at the same time as other technologies like edge computing, AI, machine learning, and cloud networking are reaching maturity. “The 5G business case stacks up on its own,” he said. “It makes more sense for Telstra to invest in 5G. We talk a lot about use cases. But, I can see a lot on the enterprise side. We need to think differently how to engage with customers. Telcos as an industry don’t have a great record when it comes to customer experience. We are in an incredibly exciting time for 5G. It is an opportunity for us to change the paradigm of a telco.”