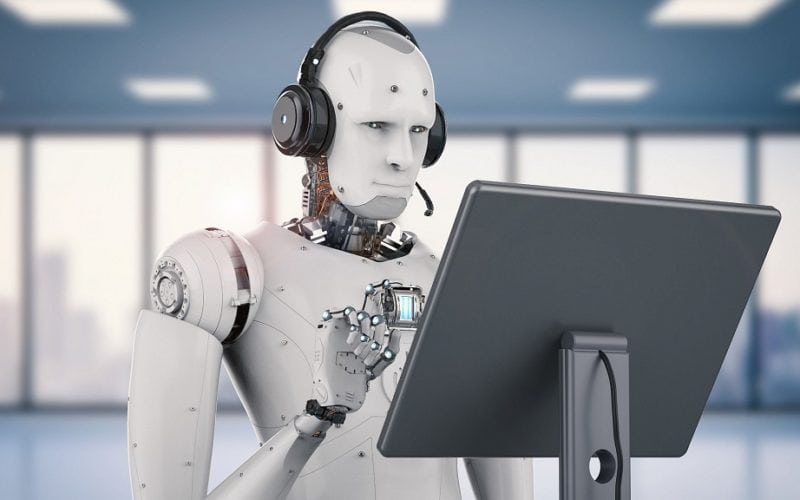 A robot working a device with headsets. Photo Credit: iStock

There’s no avoiding it: tech companies that are invested in machine learning and Artificial Intelligence (AI) need to address the impact that automation will have on jobs. It’s time to take leadership on the issue. AI is an exciting innovation, but discussions about retraining, displacement, and job creation have somehow been left in the hands of tech analysts who continue to either predict total economic collapse, or reference the one single example of a job that wasn’t phased out (initially) by machine — bank tellers.

Back in 2015, the Wall Street Journal ran a piece titled “Technology Isn’t a Job Killer,” in which writer Tamar Jacoby puts ATMs front and center right in the subheader: Many predicted ATMs would eliminate bank tellers, but the number of tellers in the U.S. has risen since the machines were introduced.

Fast forward to June 1, 2018 and we’re still using ATMs as a lullaby to ease the minds of workers with “low-skill, routine” jobs. Listed under “Reasons to be cheerful” (about automation), Chris Middleton of Internet of Business cites an Asia Development Bank report that returns to the ATM:

“Automation targets mainly routine tasks, such as soldering components onto a circuit board repeatedly on an assembly line, which is both routine and manual, or counting and dispensing cash in a bank, which is routine and cognitive … While task automation may displace some types of jobs, in other cases it restructures the job such that machines handle only the routine tasks, freeing up workers to focus on more complex tasks. The introduction of ATMs, for example, changes the job for bank tellers to one of customer relationship management.”

I’m not arguing that the ATM example is invalid, but rather that it is tired and over-used. Tech industries could do a much better job explaining how automation will impact the job market because they designed the actual technology. Arguments like “robots won’t entirely eliminate jobs, just the risks associated with the jobs” don’t mean anything to laborers who may or may not assume that robotic engineers don’t fully understand that they might be employed entirely because of the risks they want to eliminate.

Without direct engagement with the public, the tech industry surrenders control of the discussion to workforce analysts and macroeconomists with data projections that (rightfully) scare the hell out of the workforce. Josh Davies, CEO of The Center for Work Ethic Development, recently gave a keynote at the University of Colorado Boulder’s 11th annual Boulder Economic Summit, during which he projected that automation could, “eliminate hundreds of millions of jobs globally by 2030, placing new urgency on efforts to retrain workers and develop the skill sets necessary for new jobs that will be created.”

BizWest’s Christopher Wood reports: Davies said that occupations most in danger of disruption are those with repetitive tasks that can be easily replicated, such as telemarketing, accounting/auditing and retail sales clerks. With the latter, he predicted that 92 percent of all retail jobs will be eliminated, accounting for 16 million people. Globally, almost 400 million jobs are predicted to be eliminated by the automation and artificial intelligence wave.

Projections with massive, rounded figures are very effective in alarming the general public. This is why tech industries need to be just as effective in explaining the benefits and re-training opportunities. It might also be a good idea to stop using language such as “low-skill” and “routine.” Some people spent decades training for those “low-skill” and “routine” jobs.

To the innovative engineer, public relations may not be as exciting as machine learning, but it’s a skillset that they’re going to have to learn in the age of AI, just as they expect the general workforce to do the same.