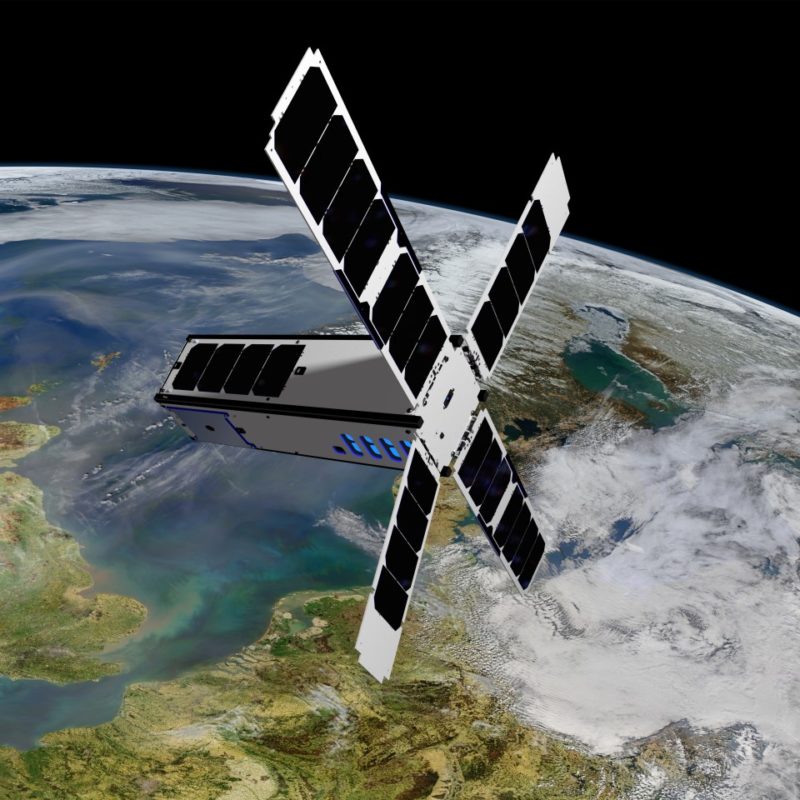 Rendition of the SeaHawk 1 satellite in orbit. Photo: Clyde Space.

A team of oceanic researchers from the University of North Carolina at Wilmington is preparing to launch a new CubeSat this summer, dubbed SeaHawk 1. The satellite will fly into orbit on a SpaceX Falcon 9, as part of Spaceflight Industries’ first dedicated rideshare mission, Sun-Synchronous Orbit A (SSO-A). According to oceanographer John Morrison, SeaHawk’s co-project manager and lead principle investigator, the mission will function as proof of concept for using CubeSats to collect high-quality scientific data, and will also demonstrate the upsides of using rideshares to get academic payloads into orbit.

Scientists at NASA and the National Oceanic and Atmospheric Association (NOAA) have used satellites for years to collect ocean color data, but low quality images from global-scanning spacecraft have restricted their efforts. SeaHawk 1, with its 120 km resolution, will supplement the larger, polar orbiting satellites currently in space with more detailed data. According to Morrison, not only does the CubeSat have eight to 10 times the resolution of its predecessors, its development cost is significantly lower. “Building the most premier sensor that we ever used cost about $14.4 million or more to develop,” he said. “Right now it’s costing us around $500,000 to build one of these satellites, and on the order of $250,000 for launch operations with Spaceflight.”

SeaHawk’s high resolution will allow scientists to more accurately monitor the ocean’s smaller-scale features, particularly around estuaries, coral reefs and other near-shore environments, Morrison said. Additionally, because land reflects more light than the ocean, one of the major issues with currently operational global sensors is that they suffer from a lot of signal interference. SeaHawk’s improved sensors can mitigte some of that saturation near coastal zones, which could prove useful in determining proper fishing zones, for example, or better characterizing marine pollution. “We can begin to look at things like red tides, phytoplankton blooms … or oil spills, or we can look at the health of fisheries and habitats,” Morrison said.

Players from the government, academic and commercial spheres have all contributed to the SeaHawk project: Cloudland Instruments is building the sensor, Clyde Space constructed the satellite bus with Commercial-Off-the-Shelf (COTS) components, and NASA’s Ocean Biology Processing Group (OBPG) will download, process and make the data available to the public for free.

According to Morrison, the SeaHawk project has been somewhat hobbled by the bureaucracy around getting the satellite licensed. “Because we’re transmitting both data and commands globally we have to clear it with both the Federal Communications Commission (FCC) and the International Telecommunications Union (ITU), and to be honest the FCC is getting swamped with these,” Morrison said. “They might have had four or five satellites a year before, now they’re getting hundreds of them … They work with us, but because there are so many satellites going up now, we may not hear about our radio licensing until pretty close to the time the satellite is going up, which makes it difficult for our hardware people to tune the radios on the spacecraft as well as on the ground stations.” Morrison said he’s hopeful, though, that with the rapid growth of requests, the staffing at these agencies will improve in turn to accommodate them.

The other issue is that Morrison’s team is required by law to encrypt all the data transmitted from the satellite, even though it isn’t technically a commercial asset. “If the data is encrypted, then [NASA] can’t help us debug any transmission problems that might occur as they normally would,” he said. As a result, the team is requesting a waiver from the FCC, but it’s likely they’ll have to wait up to three months to hear a response.

The SSOA mission — which was delayed from its original target date last year — is the first for which Spaceflight Industries purchased an entire launch vehicle for its customers. In total, SSOA will loft 120 satellites for nearly 50 government and commercial customers from 16 countries. “Buying a large launch vehicle and being able to make super competitive pricing is really attractive to educational institutions because, historically, they haven’t had a surplus of money,” commented Curt Blake, the company’s president of spaceflight.

Spaceflight Industries also purchased an Electron rocket from Rocket Lab last year, ideal for launching smaller satellites similar to SeaHawk 1. Due to economies of scale, dedicated smallsat launchers have a higher price per kilogram than larger vehicles like the Falcon 9 (which could be up to three times cheaper), Blake said. But the tradeoff for customers is greater control over their launch schedule and destination in orbit — not unlike the difference between a bus and a taxi. “In some instances, that’s money well spent,” Blake said. Spaceflight Industries’ intent is to purchase a range of different launch vehicles to accommodate their customers’ varying needs, such as academics like Morrison who are less concerned about timing than budget.