Can Satellites Solve the Farmer Suicide Crisis in India? 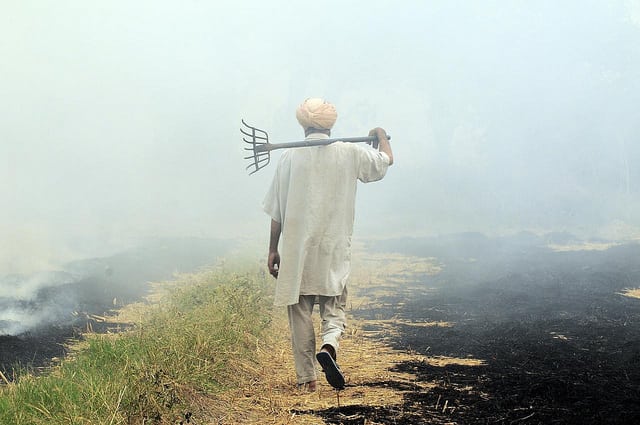 Burning of rice residues in Southeast Punjab, India, prior to the wheat season. Photo: Flickr/CIAT.

More than 12,000 farmers in India have committed suicide every year since 2013, according to the Centre for Global Health Research. This phenomenon marks an acceleration of a trend motivated equally in part by climate change and the country’s struggling agrarian sector. SatSure, a data analytics company based in Bangalore, hopes to ameliorate this pressure by closing the financial gap between farmers and the companies that insure their crops.

Researchers from the University of California, Berkley, have found a strong correlation between rising temperatures and the rate of suicides, with an increase of 1 Celsius associated with an average of about 70 additional suicides per day. Droughts have ravaged the country’s crop yields, sharply reducing farmers’ income across the sector and disrupting the predictability of revenue. Coupled with overwhelming debt from bank loans, farmers with little options to improve their livelihoods have begun to commit suicide on an epidemic scale.

“The big problem in India in the last decade has been waiving off farm loans due to drought and other calamities. It becomes difficult for banks to understand the reaping capability of farmers,” said Prateep Basu, SatSure’s Chief Operating Officer (COO) and former Northern Sky Research (NSR) analyst.

According to Basu, SatSure is combining satellite-sourced data, traditional remote sensing and novel Artificial Intelligence (AI) algorithms to improve financial institutions’ understanding of the sector. “Our products [run] through historical and current data sets to provide insights on things like weather, crop prices … and soil health,” he said.

SatSure uses these data sets to create income growth profiles or credit scores, which its clients — banks, governments, and crop and rain insurance firms — can leverage to more accurately assess the financial impacts of climate change in the region. One of the benefits of using historical satellite data and images, Basu said, is that it allows you to observe how these trends change over time, “which is not possible through drones.”

According to Basu, the current lack of information on crops is the crux of the insurance issue in India, as it is the criterion for setting insurance contracts between farmers and financial institutions. “The risk is not well assessed,” he said. “We are enabling ‘smart contracting’ by building solutions which directly flow into the actuarial models and provides them a view of the risk that each crop by each region carries.”

Basu said SatSure is currently working alongside two state governments in India as well as private insurance companies in Ghana and Nigeria. In the future, the company plans to expand its growth income profiles to other developing nations in places such as Southeast Asia.

As a Business-to-Business (B2B) enterprise, Basu said the biggest challenge in getting the company off the ground was educating investors on how it will drive value. Fortunately, he said, starting a high-tech company in Bangalore is somewhat easier compared to Silicon Valley due to the low cost of living and the region’s strong emphasis on tech innovation. “Mumbai is the financial capital, but Bangalore is the startup capital because it has a rich base of educational institutions [and] research institutes,” he said.

Moreover, a number of large corporations have established their global presence from Bangalore. Khosla Ventures, for example, which has invested in the former Skybox Imaging (before it was sold to Google and renamed Terra Bella, now part of Planet) and Rocket Lab, is headquartered in Menlo Park, California, but also has an office in Bangalore.

According to Basu, Bangalore — “the Silicon Valley of the East” — receives anywhere between $7 billion and $13 billion in venture capital funding each year.

“There’s a lot of money that comes in, not just through local channels but through Indian-Americans and British-Indians who set up their own venture funds to reinvest here,” he said. “The network is very strong here.”

Basu believes the understanding of space as it relates to economic growth in India has increased drastically over the past decade. Still, he said he hopes to see additional government support to get high-tech companies such as SatSure off the ground. “Support in terms of policies to absorb some of the risk that companies like us take,” he specified, which could take the form of better taxation policies, faster registration channels and funds akin to NASA and DARPA’s for companies to tap into. “That’s something that’s still lacking for us in India,” he said.