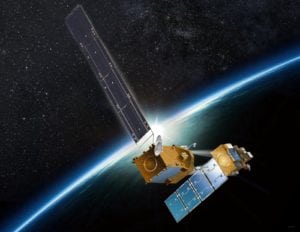 [Via Satellite 12-12-2016] NASA has selected satellite systems provider Space Systems Loral (SSL) to provide its SSL 1300 platform spacecraft bus to NASA’s Goddard Space Flight Center for its Restore-L servicing mission. The Restore-L mission, which will demonstrate the ability to extend the life of a satellite in Low Earth Orbit (LEO), is scheduled to launch in 2020.

The Restore-L spacecraft will use robotics to grasp, refuel and relocate an existing U.S. government satellite already in LEO with the goal of demonstrating tools, technologies and techniques that can be implemented on future government and commercial missions. The SSL spacecraft bus will provide the structure and power to support the mission. SSL will also provide critical hardware and services for development, deployment and operations including services for mission integration, test and launch.

“This mission will be a breakthrough in the way we think about satellites on orbit, which previously could not be touched after launch,” said John Celli, president of SSL.