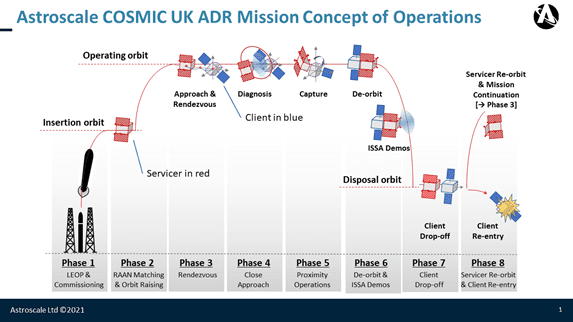 The feasibility study will prepare the groundwork for an Active Debris Removal (ADR) mission to remove two defunct satellites from space in 2025. The proposed study, called Cleaning Outer Space Mission through Innovative Capture (COSMIC), will use Astroscale’s capture technology and on-orbit capabilities. In the mission, COSMIC Mission Concept of Operations (CONOPS), the servicer spacecraft will capture and relocate a defunct satellite, then raise back up and repeat the process with a second satellite.

This initial technology was first demonstrated in orbit earlier this year by the ELSA-d mission, which completed test capture of a replica debris satellite.

Astroscale is also working on a mission with OneWeb for the European Space Agency’s Sunrise program to develop its ELSA-Multi (ESLA-M) spacecraft, which will be capable of capturing multiple defunct satellites in one mission. The CONOPS satellite will be based on the ELSA-M spacecraft.

The company will work with MDA for its expertise in capture robotics including robotic operations experience, and Thales Alenia Space will focus on the propulsion system and on-orbit refurbishment aspects such as refuelling.

“These new projects will support our leading role in cleaning up our orbit, which has been neglected for far too long, and will help keep satellites operating safely so they can continue to provide vital services such as communications and climate change monitoring,” commented George Freeman MP, minister for Science, Research and Innovation at the U.K. Department for Business, Energy and Industrial Strategy.

This award was announced on Tuesday during the 72nd International Astronautical Congress (IAC) in Dubai. It comes after the U.K. announced its first-ever space strategy last month, which includes a specific commitment to clearing space debris.