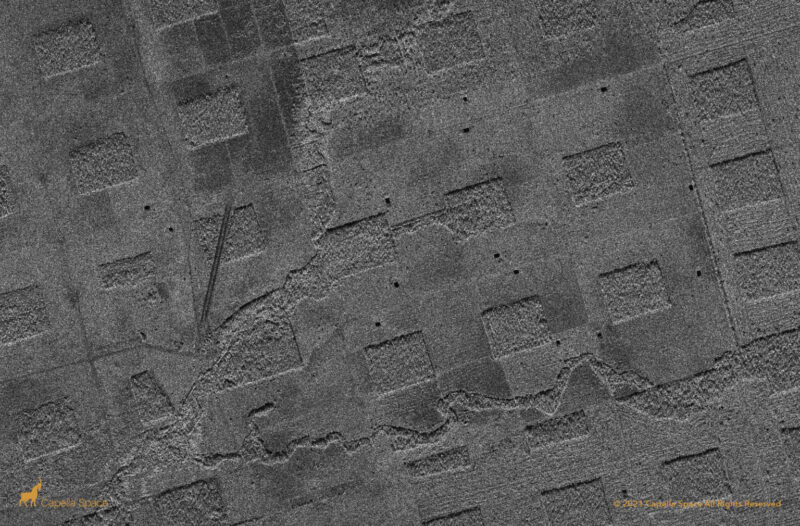 Capella Space is a commercial provider of Synthetic Aperture Radar (SAR), imagery that can be captured in the dark and through clouds.

Optical terminals will also help Capella serve the U.S. government, one of its key customers, he said.

“We recognize that the SDA is driving directly toward optical crosslinks to enable transport of data at low latency and high data volume,” Lenz said. “We see the U.S. government as one of our key customers, and being able to deliver our data to that customer in whatever format and whatever methods add to lowest latency, is a big win for us.”

Capella said it chose Mynaric’s CONDOR Mk3 terminal after a vetting process, and plans to install the terminals on its satellites in late 2022. Mynaric has previously demonstrated compatibility with the SDA systems and standards for Optical Inter-Satellite Links (OISLs).

Lenz said it is an “open question” how many terminals Capella will purchase or how many satellites will be equipped with optical terminals, and it will depend on demand from SDA and other customers.

The NDSA is an ecosystem of hundreds of satellites in Low-Earth Orbit in seven capability layers that will perform a variety of defense functions including data communications and missile tracking. Capella said it will be the first commercial SAR provider to demonstrate OISL compatibility with the NDSA.

“The overall goal is to ensure that we are compatible with the SDA standard and their deployed system —  to show that we can send data between ourselves and the SDA,” Lenz said.

Mynaric CCO Tina Ghataore commented on the deal in the news release: “This is just the beginning of a strong partnership between Capella Space and Mynaric and illustrates the importance of our efforts on interoperability and serial production capabilities to meet the needs of our commercial and governmental customers.”