Isotropic to License its Multi-Beam Antennas to Aero, Defense Integrators 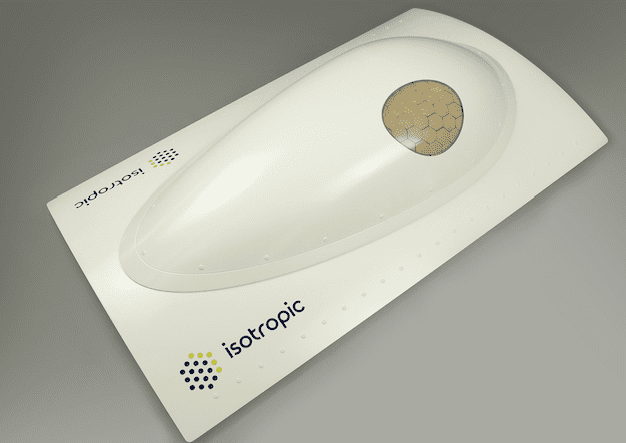 Isotropic Systems is licensing patented core components of its multi-beam antennas to aeronautical and defense system integrators in order to accelerate customized designs, certifications, and deployments of next-generation terminals aboard commercial, business, and government aircraft. The company announced that early collaborative licensing discussions are underway.

Isotropic Systems said the flexible platform conforms to the fuselage or radome for a tailored terminal that provides a continuous make-before-break connection throughout a commercial flight or government operation by linking with multiple satellites in multiple orbits while using less power than other flat panel or electronically-steered antennas. The United Kingdom-based company said that aeronautical and defense system integrators that license its multi-beam antenna technologies will be working toward the integration of patented lens modules and chipsets into their terminal platforms throughout 2020, with trials set for the first half of 2021. The company plans for the commercial launch timeframe of 2021 and 2022 to align with new high throughput Low-Earth Orbit (LEO) and Medium-Earth Orbit (MEO) constellations expected to initiate services in 2022.

“Our optical multi-beam antennas provide customized high-performance connectivity seamlessly across multiple satellites and orbits at low power consumption, which delivers big advantages over single beam antennas to both commercial and government aircraft operators – from airlines to UAVs and every form of aircraft in between,” said John Finney, Isotropic Systems Founder and CEO. “Isotropic Systems’ optical lens modules can be conformed to the size and shape of the fuselage or radome for a tailored low-profile solution that meets the requirements that government and commercial markets value the most as they look to unleash a new level of capabilities from their In-Flight Connectivity (IFC) systems.”