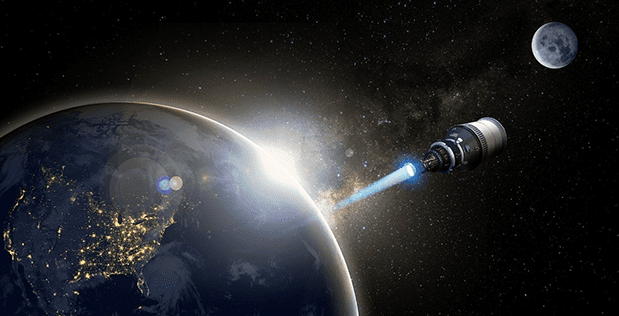 The awards, announced Monday, are for the Demonstration Rocket for Agile Cislunar Operations (DRACO) program. This program looks to demonstrate a NTP system above Low-Earth Orbit (LEO) in 2025.

“Rapid maneuver in the space domain has traditionally been challenging because current electric and chemical space propulsion systems have drawbacks in thrust-to-weight and propellent efficiency, respectively,” the agency said in an announcement. “DRACO’s NTP system has the potential to achieve high thrust-to-weight ratios similar to in-space chemical propulsion and approach the high propellent efficiency of electric systems. This combination would give a DRACO spacecraft greater agility to … maneuver in cislunar space.”

According to DARPA, Phase 1 will last 18 months and consist of two tracks. General Atomics will perform the Track A, the preliminary design of an NTP reactor and propulsion subsystem concept. Blue Origin and Lockheed Martin will independently work on Track B, to produce an operational system spacecraft concept to meet mission objectives and design a demonstration system spacecraft concept.

“Nuclear-driven spacecraft can change the way we explore the depths of space. Lockheed Martin is looking forward to working with DARPA on the DRACO project,” Rick Ambrose, executive vice president of Lockheed Martin Space tweeted.