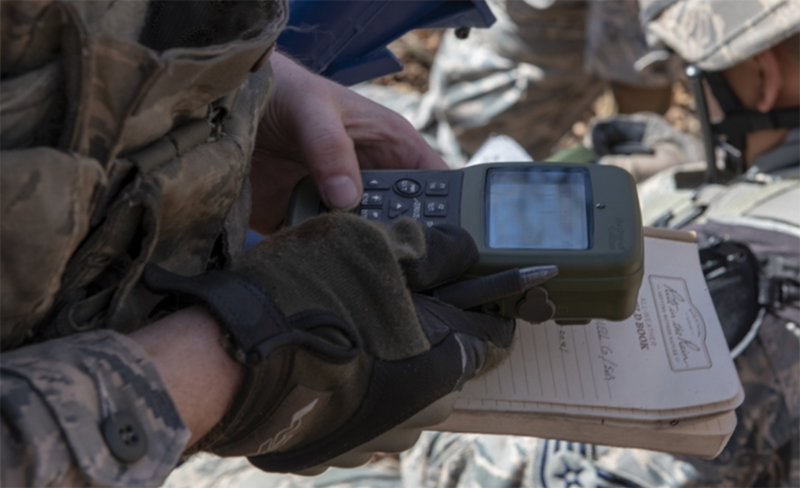 An Airman with the 374th Security Forces Squadron uses a Defense Advanced GPS Receiver (DAGR) to track the team’s current location in correlation with the coordinates of the mission objective during a field training exercise at Camp Fuji, Japan, Nov. 8, 2018. Photo: U.S. Air Force, Matthew Gilmore

In focusing particularly on GPS technologies, industry and warfighters alike are not taking enough advantage of PNTdata that can be extracted from equipment such as the AN/PSN-13 Defense Advanced GPS Receiver (DAGR), said Jim Baker, senior principal engineer for the Marine Corps Tactical Systems Support Activity (MCTSSA), a subordinate command of Marine Corps Systems Command located at Camp Pendleton, California.

An Airman with the 374th Security Forces Squadron uses a Defense Advanced GPS Receiver (DAGR) to track the team’s current location in correlation with the coordinates of the mission objective during a field training exercise at Camp Fuji, Japan, Nov. 8, 2018. The DAGR integrates map graphics with two signals of GPS code to help units in the field stay on course. (U.S. Air Force photo by Senior Airman Matthew Gilmore)

“There is so much more information available from a DAGR today that nobody is looking at, nobody is using, and it’s being … updated every single second,” he said Wednesday during a presentation at the SMI Group’s Military Space USA conference here. He urged program managers to consider utilizing that data more productively, rather than focusing solely on GPS technology.

The U.S. military can draw PNT data from a variety of sources to provide assured command and control, to include human operators, platform instruments and both GPS-enabled and non-GPS-enabled systems, he said.

In the MCTSSA laboratory, Baker can create training data for machine learning applications to help differentiate between instances of spoofing and jamming equipment, as well as “normal” situations, he said.

“I can record data … with well over 2,000 bits of information every second” that can help train a machine to detect when jamming or spoofing begins, and “differentiate that from just incidental or normal [electromagnetic interference] from local transmitters that might be getting in the system,” he said.

The goal would be to generate automatic reports with all the spectral information that is available from PNT receivers into a technical report that can be used by command posts, ground operators and the intelligence community. In an era of renewed great power competition in space where alternate PNT data could be crucial, this report would be “just another source” of information, he noted.

The commando on the ground may not be aware that their device is being jammed until hours after the incident, Baker said. “Maybe Intel has got access to all these sensors,” he adds. But if a Marine only finds out five hours later, “that’s probably too late.”

“If I can find out and detect the jamming … from when it’s first detected by my receiver and starts collecting data or analyzing that, or at least recognize that there’s jamming going on – even before it actually affects my PNT solution – then I can do something about it,” Baker continued.