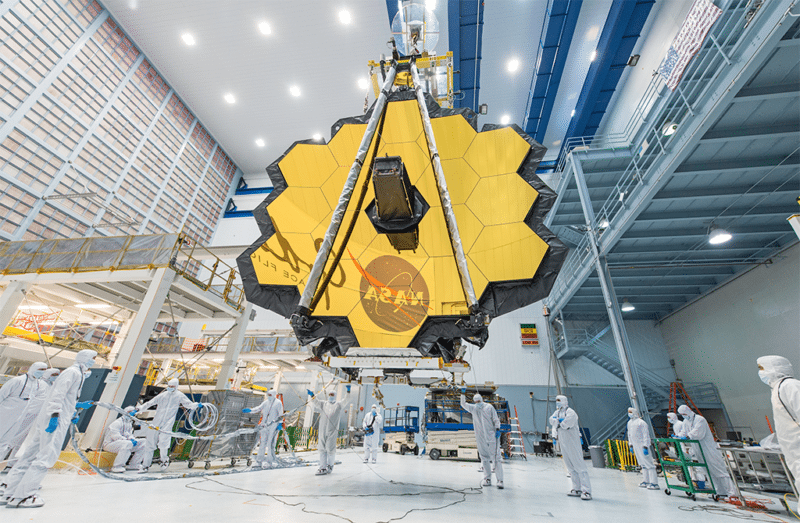 The often-delayed launch of the James Webb Space Telescope has slipped another 10 months based on the findings of an independent review board, NASA announced June 27. The launch, which was previously slated for May 2020, is now scheduled for March 30, 2021, the agency said. Former aerospace industry executive Tom Young, the review board’s chair, told reporters that there is an 80 percent confidence level in the new launch date.

NASA said that Webb’s development is now estimated to cost $8.8 billion, exceeding an $8 billion cap. The agency plans to ask Congress to allow it to spend an additional $837 million in fiscal years 2020 and 2021. The Webb’s total life cycle cost, including the launch and five years of operation, is now estimated at $9.66 billion.

In March, NASA moved the launch date from spring 2019 to May 2020 but signaled that a further delay was possible based on the independent review. The new 2021 launch date means that Webb is now slated to lift off about seven years later than originally planned. The review board attributed recent delays to five factors: human errors; embedded problems, or those not detected until a major test; lack of experience in areas such as the tennis-court-size sun shield; excessive optimism; and systems complexity. Human errors that have had a major schedule impact were the use of the wrong solvent to clean propulsion system valves, a test wiring error that caused excessive voltage to be applied to energy-converting transducers, and the improper installation of sun shield cover fasteners.

“The [solvent] error was a failure to check with the valve vendor to ensure the solvent to be used was recommended and would not damage the valves,” the board wrote in its report. “The valves had to be removed from the spacecraft, repaired or replaced, and reinstalled.”

Thomas Zurbuchen, associate administrator of NASA’s Science Mission Directorate, told reporters that the agency fully agrees with 30 of the review board’s 32 recommendations for preventing future problems. It is developing its response to the other two suggestions.

Northrop Grumman, the telescope’s prime contractor, said in a statement that the company has “learned from the recent challenges of the integration and test phase of the program and implemented the necessary corrective actions. We have put the people, processes and tools in place to be successful and help prevent further issues.”

NASA Administrator Jim Bridenstine indicated that he remains committed to the James Webb Space Telescope despite the delays.

Webb is “going to do amazing things – things we’ve never been able to do before – as we peer into other galaxies and see light from the very dawn of time,” Bridenstine said in a statement. “Despite major challenges, the board and NASA unanimously agree that Webb will achieve mission success with the implementation of the board’s recommendations, many of which already are underway.”

A joint project of NASA and the Canadian and European space agencies, Webb is designed to search for Earth-like planets and increase knowledge of how the universe was formed. It is supposed to lift off on an Arianespace Ariane 5 rocket from the European Spaceport in French Guiana.

This story was originally published by Via Satellite sister publication Defense Daily. It has been edited to better serve our audience.