Can Trump Set Up a Space Force? This Senator Says Nay 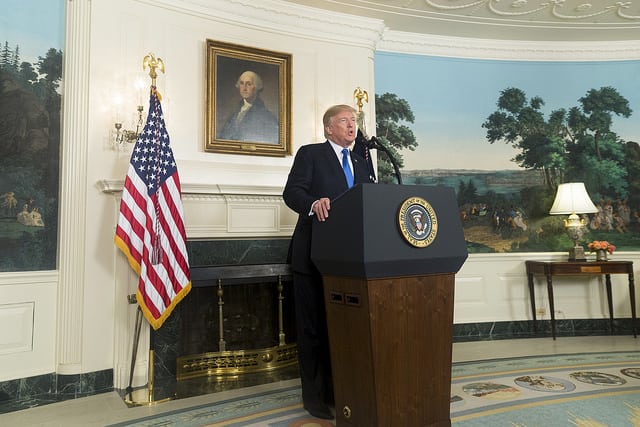 President Trump announced June 18 that he has told the U.S. Department of Defense (DOD) to start forming a space force to ensure U.S. space dominance, but a key lawmaker insisted that DOD cannot proceed without congressional approval.

When Trump asked Marine Corps Gen. Joseph Dunford, chairman of the Joint Chiefs of Staff, to “carry that assignment out,” Dunford replied, “We got it.”

But Sen. Bill Nelson, D-Fla., a senior member of the Senate Armed Services Committee and the ranking Democrat on the Senate Commerce, Science and Transportation Committee, said on Twitter that only Congress can authorize the creation of a space force. Lawmakers are divided on the issue, with some favoring a separate space entity inside or outside the Air Force and others, such as Nelson, saying that such a move would be too disruptive.

The president told a US general to create a new Space Force as 6th branch of military today, which generals tell me they don’t want. Thankfully the president can’t do it without Congress because now is NOT the time to rip the Air Force apart. Too many important missions at stake. https://t.co/uYzqg1W8nE

“I am thrilled to have President Trump’s continued support for this critical mission to help strengthen our national security,” Rogers said in a statement. “I look forward to working with the president to make this initiative a reality.”

The White House released no details about how the space force will be set up. A defense official said in a statement that the “Joint Staff will work closely with the Office of the Secretary of Defense, other DOD stakeholders and the Congress to implement the president’s guidance.”

Proponents of a space corps or space force say a major space revamp is needed to counter the development of anti-satellite capabilities by China and Russia. Trump had previously indicated that he was warming to the idea.

“My new national strategy for space recognizes that space is a warfighting domain, just like the land, air and sea,” the president said in March. “We may even have a space force.”

The Pentagon, which opposed a congressional proposal last year to create a space corps within the Air Force Department, has been taking another look at the idea as part of a broader, congressionally mandated review of space reorganization options. DOD has been planning to send Congress a report on the review’s conclusions by Aug. 1.

Trump made his surprise announcement before signing Space Policy Directive – 3, a new space traffic management policy designed to protect U.S. national security and commercial spacecraft amid growing congestion in space. The policy, which Vice President Mike Pence previewed in April, directs the Department of Commerce to provide a basic level of space situational awareness for public and private use. That information will be based on the space catalog compiled by DOD.

This story was originally published by Via Satellite sister publication Defense Daily. It has been edited to better serve our audience.