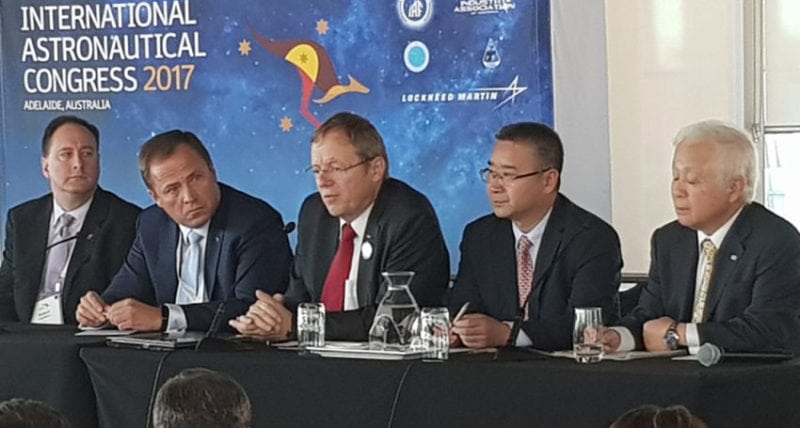 The heads of the world’s largest space agencies are attending the congress, all of whom praised Australia’s decision.

NASA Acting Administrator Robert Lightfoot said the agency would provide an excellent opportunity to increase the collaboration with Australia. “From a NASA perspective we’ve had a great partnership with Australia for a long time and I look forward to seeing which areas Australia decides to focus on,” he said. “I think that will be their challenge, but there’s enough room for them to participate in what we’re doing. It’s a global endeavor — we’re all here for that reason — and I think Australia not being a part of that until now is a little bit strange.”

“We welcome this very much,” he said. “There are two aspects to this: One is the national development and capacity building so you have a voice in your own country but at the same time you have a voice to the outer world. At the beginning of the ‘60s Australia was an associate member of the European Launch and Development Organization (ELDO), so we are really happy we can continue our strong cooperation.”

Japan Aerospace Exploration Agency (JAXA) President Naoki Okumura said his agency was already working with Australia on Earth Observation (EO) satellite activities but the agency would lead to closer ties. “In the future we would like to work more closely with Australia in order to become an innovation center and strengthen our relationship,” he said.

Canadian Space Agency (CSA) President Sylvain Laporte said establishing a national space program was not without its challenges. “There’s a ton of opportunities and things you can do but there’s always limited resources,” he said. “Putting in a sound governance system that will allow the space agency to make the right decisions, to prioritize what it should do and to make sure it can make the best pitch possible to politicians to secure as much funding as is required for this country to invest in space, I think would be a good first step.”

Until now, Australia was one of the only Organization for Economic Cooperation and Development (OECD) countries without a national space agency.

A federal government review into the long-term plan for the sector in Australia was announced in July but will not be completed until March, dashing hopes of an announcement at the congress. However, Senator Simon Birmingham, who announced the agency at the opening of the congress, said it was already clear that the case for a national agency was “compelling.”

“This agency will be the anchor for the domestic coordination and the front door for our international engagement for so many of you from across the world’s space industries,” he said. “The global space sector was growing fast and Australia needed to be a part of it … We have listened to the industry and the overwhelming response to our review has been support for a space agency.”

SIAA Chair Michael Davis said the SIAA was thrilled with the announcement and expected the agency would be a collaboration between government and industry.

“What a start to this congress,” he said. “The aim is to deliver clear economic benefit to the Australian economy and of course, to re-enforce our status as a participant of long-standing in the development of outer space. We will soon take our place at the table of space agencies as major initiatives and cooperative projects are considered and developed.”

“We have the capacity, the science, the skills, the research and development environment, the culture, the industry nous. Now we have the standing of the Australian Space Agency,” he added.

South Australian Premier Jay Weatherill said the week presented an opportunity for the state to send a bold message to the world.

“We are ready to put ourselves in the service of this nation by becoming a key part of a national space agency,” he told the congress. “We are also sending a clear message to the world that we want to work with you — as our state logo suggests — as an open door to opportunity.”

The SIAA launched a white paper in March calling on the Australian government to establish a national space agency.

Last month Weatherill and ACT Chief Minister Andrew Barr signed a Memorandum of Understanding (MOU) to work together toward the creation of a Canberra-based space agency with a prominent presence in Adelaide.

The state government last week also announced a space industry center was being established in Adelaide as part of Defense Industries Minister Martin Hamilton-Smith’s portfolio to include space.