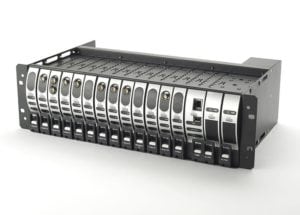 ViaLite has announced that its Radio Frequency (RF) over fiber links are compliant with the U.S. Army MIL-STD-188-164B ARSTRAT-WGS standard. Craig Somach, director of sales for North America, confirmed the ViaLiteHD RF over fiber transmission equipment successfully completed tests carried out in conjunction with a U.S. systems integrator.

Following qualification, ViaLite’s links can be used to connect ground stations for the Wideband Global Satcom (WGS) system, a high capacity satellite communications system principally designed and developed for the U.S. Department of Defense (DOD). MIL-STD-188-164 is a series of technical standards and design objectives relating to interoperability and performance common to both long haul and tactical communications systems.

According to ViaLite, as well as being able to operate over long distances due to their low attenuation, RF over optical fiber systems can prevent attempts to eavesdrop or corrupt critical operational data. The fiber is also immune to Electromagnetic Pulse (EMP) strikes and allows antennas to be located greater distances away from assets.