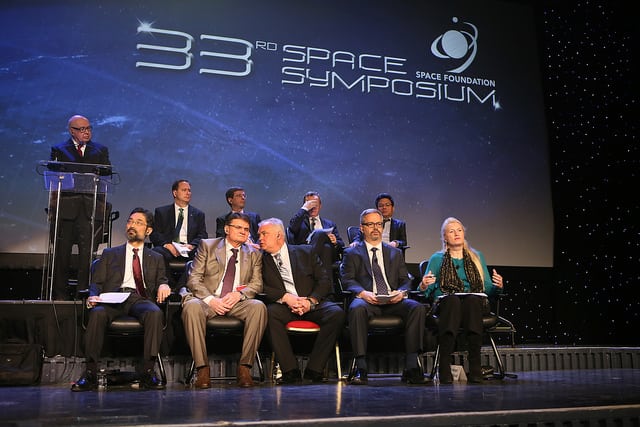 Education and cooperation across borders was the main theme of the space agency leaders panel at the 33rd Space Symposium. The speakers, representing agencies from countries across the globe, outlined some of their plans and concerns for the short-term future — but each stressed that progress can only be made with assistance from international allies.

Jean Yves Le Gall, president of the French space agency Centre National d’Etudes Spatiales (CNES) noted France’s long-standing tradition of cooperation with foreign allies and emphasized that it is particularly important for more developed nations to support those only now emerging into the space industry. “We consider that the more players we have in the space arena, the better it will be,” he said.

Mexico is a prime example of one of those emerging nations. Francisco Javier Mendieta Jimenez, general director of the Mexican space agency Agencia Espacial Mexicana (AEM), highlighted that the country has already begun to sign agreements with other space agencies to spur development of its own technological capabilities. Fortunately, Mexico is starting from a strong foundation with an aeronautical industry that is already “quite well developed” due to its proximity to the U.S. “We are trying to make this transition from aeronautical to space, from planes to satellites, from turbines to rockets,” Jimenez said.

Mexico hopes to address some of mankind’s greatest challenges related to space, including connectivity, climate change and security, in partnership with the more than 20 agencies with which it has already signed agreements. “The idea is to capitalize our established aeronautical field with our established IT field, because these two pillars will constitute the space ecosystem of the future,” he said.

Meanwhile, countries such as the Republic of Korea have already begun to invest in international education to help bring emerging nations into the fold. “Korea has been providing annual space training programs to developing countries since 2010,” said Insun Kim, president of the Korea Aerospace Research Institute (KARI).

From a Canadian perspective, Sylvain Laporte, president of the Canadian Space Agency (CSA), also sees education as the major enabler of a strong space industry in the future. Canada is currently midway through an astronaut recruitment campaign and has used the publicity from the selection process to encourage young minds to pursue careers in Science, Technology, Engineering and Mathematics (STEM). “Once we whittled down the first 4,000 applicants to about 72, we posted the profiles to our website and got millions of hits on it. We now have gotten feedback that teachers and guidance counselors are using the profiles of these astronauts to show that there are real people who serve in these environments,” he said.

Laporte also highlighted Canada’s Tomatosphere program, a nationwide experiment geared toward primary school students that allows them to measure the growth differences between Earth-bound tomato seeds and those sown in space.

Pascale Ehrenfreund, executive board chair of the German Aerospace Center (DLR) stressed that it is important to nurture interest in STEM as early as possible. “We don’t start at university, but earlier,” she said, such as with DLR’s school club program that currently educates “more than 40,000 people for the fascination of space.” As the only woman on the panel, Ehrenfreund also felt obliged to shine a spotlight on Germany’s Girls’ Day, a career orientation project for female students. The project has seen very positive feedback so far, with 40 percent of participating organizations receiving inquiries for internship and training. Germany is also in the midst of recruiting its first female astronaut, which Ehrenfreund said has received very strong press coverage.

As for the future, the speakers all seemed very excited to lay out their agency’s current mission pipeline, particularly those involving the Moon and Mars. Kim said that Korea is focusing on finalizing development of its three-stage launch vehicle along with perfecting its liquid engines. Once that proves successful, KARI will use the vehicle to carry out its lunar exploration project, with a test launch scheduled for 2019.

Johann-Dietrich Worner, director general of the European Space Agency (ESA), said ESA also has its sights set on the Moon as it offers special opportunities to develop new technologies, such as resource mining and astronomy from the far side. “The Moon still has a lot of secrets,” he said. The ESA’s ultimate vision is what it calls the “Moon Village,” a collaborative community open to any and all interested nations that could be used as a testing ground for human activity further out in the solar system.

Next year, China plans to land on the far side of the Moon for the first time in human history, but Yulong Tian, secretary general of the China National Space Administration (CNSA) pointed out that the mission wouldn’t be possible without “extensive international cooperation.” Tian said China also plans launch a lunar sample return mission later this year, as well as additional missions to the lunar poles in the coming five to 10 years.

While Germany is developing a communications satellite to be placed in Geosynchronous Earth Orbit (GEO), much of the DLR’s manpower has been dedicated toward Exomars 2020. “Germany together with France and the U.S. is delivering the core instrument, the Mars Organic Molecule Analyzer (MOMA). It will be for the first time able to measure biomarkers under the Martian surface,” Ehrenfreund said. Germany is also assisting Japan Aerospace Exploration Agency’s (JAXA) Hayabusa 2 mission, which launched back in 2014 to collect material from the Ryugu asteroid and is scheduled to return to Earth by 2020.

For LeGall, the biggest challenge overall for the space industry is to “change a lot without changing too much.” In other words, he elaborated, while it is important to keep the space industry’s heritage alive by continuing projects that have marked its success thus far, leading agencies must also adapt to accommodate the arrival of both emerging countries with new needs and “new space” companies innovating fresh approaches.