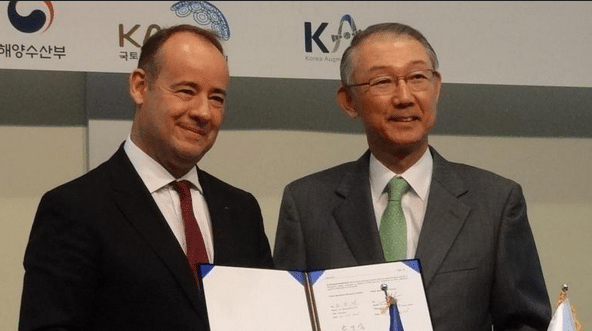 The EGNOS system has been operating in Europe since 2009 for Safety of Life (SOL) services, but KASS will enhance the positioning performance provided by the current satellite navigation system GPS and with evolution for the future satellites, Glonass and Galileo. According to KARI, it will ensure integrity and availability of services as well as improve positioning accuracy to within one meter.

The ground infrastructure will initially operate via a relay provided by an existing geostationary satellite, and it will be interoperable with other Satellite Based Augmentation Systems (SBAS) worldwide, which guarantee air traffic safety of planes move between zones. KARI and Thales Alenia Space will be applying an approach based on partnership, which means that an integrated French-Korean team will be in charge of the project under Thales Alenia Space’s responsibility.