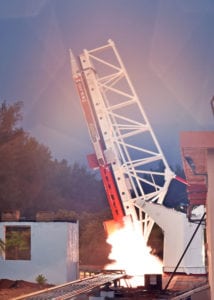 [Via Satellite 08-29-2016] The Indian Space Research Organization (ISRO) completed an experimental mission using a scramjet engine on Aug. 28. The test used ISRO’s Advanced Technology Vehicle (ATV), a two stage spin stabilized sounding rocket with identical solid motors, as the booster to carry the engines. ISRO mounted the twin scramjet engines on the back of the second stage. The engines functioned for about 5 seconds as planned for the short duration test, with a hypersonic flight at Mach 6.

The experimental mission is a step toward the agency’s goal of realizing an air breathing propulsion system for a future space transportation system. The ISRO-designed scramjet engine uses hydrogen as fuel and oxygen from the atmosphere as the oxidizer. Some of the technological challenges handled during the development include hypersonic engine air intake, the supersonic combustor, development of materials withstanding very high temperatures, computational tools to simulate hypersonic flow, ensuring performance and operability of the engine across a wide range of flight speeds, proper thermal management, and ground testing of the engines.

After a flight of about 300 seconds, the vehicle touched down in the Bay of Bengal, approximately 320 km from Sriharikota, India. With this flight, ISRO successfully demonstrated critical technologies such as ignition of air breathing engines at supersonic speed, holding the flame at supersonic speed, air intake mechanism, and fuel injection systems.