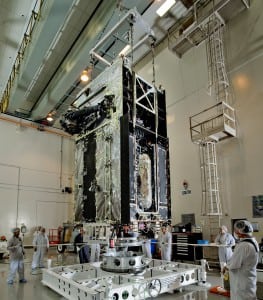 [Via Satellite 05-12-2015] Recently, the U.S. Air Force’s Space and Missile Systems Center announced the successful completion of the Capability Integration (CI) phase and transition into the Capability Evaluation (CE) phase for its new Space Based Infrared System (SBIRS) ground system, which is currently in development. Completion of CI phase indicates the system has reached sufficient maturity to enter the more formal CE testing phase, which indicates the process in on track for the Air Force’s planned operational acceptance of the ground system in 2016.

The existing SBIRS ground system has been operational since 2001. Currently, each of the three satellite types are controlled via three ground software systems located at separate facilities. With the new system, all operational control will be consolidated under one primary mission control station with a single backup control station. In addition, the warfighter will experience a significant increase in performance capability across SBIRS’ four mission areas: missile warning, missile defense, battlespace awareness and technical intelligence.