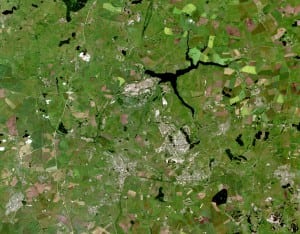 [Via Satellite 09-23-2014] The Russian Federal Space Agency (Roscosmos) is spearheading a new initiative to lift bans in place on satellite imagery with less than 1-meter resolution. In a meeting held with President Vladimir Putin, the agency presented a draft resolution that would allow for public use of sub-meter imagery.

Also under consideration is the use of imagery from commercial and non-Russian sources. The Russian Ministry of Defense has been a strong advocate of lighter rules governing resolution limits.

Roscosmos reports it has “adopted a number of measures” to promote lifting Russia’s ban. The Ministry of Economic Development has begun with a draft of a federal law on remote sensing that would streamline the process for end users to retrieve remote sensing data.