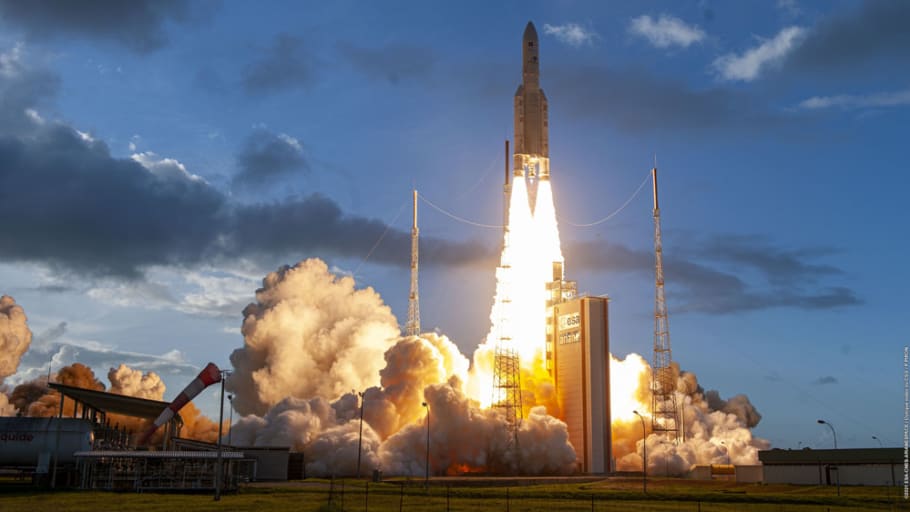 Eutelsat Communications reported a 3.5% dip in revenues in its 2020-21 fiscal year compared to the prior year, but the 1,220 million euros ($1447 million) in revenue was at the high end of the company’s guidance.

Eutelsat reported its full year 2020-21 financial results just before the scheduled launch of its QUANTUM satellite on July 30. Arianespace launched QUANTUM, along with Star One D2 satellite for Brazilian satellite operator Embratel. An Ariane 5 rocket launched the mission from the Guiana Space Center (CSG) in Kourou, French Guiana at 9 p.m. UT. Eutelsat confirmed that spacecraft systems checkout was successfully completed.

QUANTUM, developed under a public-private partnership between the European Space Agency (ESA), Eutelsat, and Airbus Defence and Space will be the world’s first universal satellite to repeatedly adjust to business requirements. The satellite will be located at 48 degrees East and is set to enter service during the fourth quarter of calendar year 2021.

“QUANTUM will supply services with unprecedented in-orbit reconfigurability in coverage, frequency and power, allowing complete mission rehaul, at any orbital position. It is a testimony to the innovative spirit and expertise of the European space industry,”  Pascal Homsy, Eutelsat’s CTO commented.

The launch took place after it was pushed back multiple times.

Eutelsat had a strong growth in its backlog for the year. At the end of June, the backlog stood at 4.4 billion euros ($5.2 billion), up 7.4% compared to the previous year. The company said this is the result of the long-term renewal contract with Sky Italia, the wholesale agreement with Telecom Italia and the additional EGNOS payload on the future HOTBIRD 13G satellite.

Fixed Broadband was the only segment to see growth in the fiscal year. Revenues for this segment were 80.2 million euros ($95 million), up 7.1% compared to the prior year. This segment makes up 7% of the company’s revenues, up 1% from last year. Eutelsat highlighted Initial revenues generated by Konnect Europe with start of wholesale contracts with Orange and TIM, along with growth at African operations

Broadcast remains Eutelsat’s largest revenue driver, although the segment continues to decline in revenue. The segment posted 741 million euros in revenue ($879 million), down 4.2% compared to the prior year. This makes up 62% of the company’s revenues — 1% more than the portion of the year prior. Eutelsat attributed the decrease to the impact of the Forthnet contract renegotiations, and lower revenues in Europe with slowdown in pace of new business affecting resellers.

Data and Professional Video is the next-largest segment, with 161 million euros ($191 million) in revenue, down 3.7% compared to last year. This segment makes up 13% of the company’s overall revenue.

“FY 2020-21 was a solid year with revenues at the high end of our upwardly revised guidance, record high cash generation and a further reduction in our net debt/EBITDA ratio,” CEO Rodolphe Belmer commented. “The year was a turning point for our Connectivity business, in particular Fixed Broadband, with notably the entry into service of KONNECT as well as major wholesale agreements with telcos Orange and TIM, for capacity on both KONNECT and KONNECT VHTS.”

Belmer also highlighted Eutelsat’s investment into the Low-Earth Orbit (LEO) market with OneWeb, which “represents an additional growth engine for our Connectivity businesses with strong potential for co-operation thanks to complementarity of resources and assets,” he said.

Looking ahead, operating verticals revenues for FY 2021-22 are expected between 1.11 billion euros and 1.15 billion euros (1.32 million – $1.36 million). Broadcast revenues are expected to be similar in the coming year, “impacted by the carry forward-effect of the slowdown in new business prevalent during most of the year.” But Fixed Broadband is expected to grow substantially with wholesale agreements and ramp-up of retail operations and Konnect Africa. The company forecasts a return to growth in 2022-23.