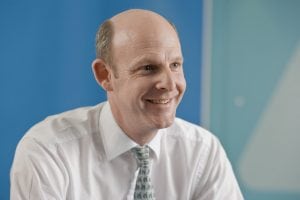 It is clear that Inmarsat believes that aviation is key to its successful future. Rupert Pearce, Inmarsat’s CEO, told Via Satellite at the end of last year, “From this diversified position, we can achieve many more shots on goal than we did a decade ago, and aviation passenger connectivity is a classic example of that. It could be a billion-dollar revenue stream for us in a decade or more, if we are successful, and if the market grows the way commentators think it will.”

What the Analysts’ Said

The results, however, seemed to be pretty much in line with expectations and analysts were cautiously optimistic about the future.

“The 1Q18 results had some bright spots (maritime progress, aviation EBITDA, enterprise growth) and some blemishes (government, a difficult VSAT ARPU story) but in the round supports unchanged guidance (and likely, consensus too). It’s not often we’ve been able to say that in the past 18 months (a sentiment that is surely being reflected in the price response),” Giles Thorne, a satellite equity analyst at Jefferies, said in a research note.

He also highlighted the performance in the government sector where there are likely to be some concerns. “The government underperformance was notable (-10 percent / -14 percent behind cons revenue / EBITDA) and a rather inevitable function of the limited visibility / lumpy nature of the underlying customer set,” added Thorne.

Thorne highlighted the fact that the company continues to progress continues in maritime with year-on-year growth of 1.6 percent, which he says represents the third quarter of sequential improvement. “Revenue was +0.6 percent ahead of consensus. A blemish on the solid performance was a deterioration in the VSAT ARPU declines,” he said.

Eric Beaudet, a satellite equity analyst at Natixis Securities, added in a research note  that while revenues were up at $345 million, they were 0.5 percent below consensus expectations ($347 million). However, he said this result underlined the improving trends with accelerating top-line growth (+4.8 percent in organic). He said this was down to multiple factors. He highlighted that this was the second straight quarter of growth in the maritime division (+2.0 percent year-on-year after -1.8 percent in 2017). Secondly, he pointed out to continued double digit growth in the In-Flight Connectivity (IFC) division and, finally Beaudet said that this was the first quarter of significant growth for some time in the enterprise division (+11 percent year-on-year) which benefited from significant growth in satellite phone airtime and handset revenues. “On the downside, government revenues remain under pressure (-9 percent) driven by lower revenues from the Boeing take-or-pay contract, a disappointment following rather positive comments regarding demand from SES last week,” he added.

Beaudet added that earnings were more or less in line with expectations as Inmarsat reiterated all of its short and long term guidance. “Even though there are some clear positives in the publication (accelerated growth in maritime, return to enterprise growth…) which should support the share price today, the 2018 guidance range remains quite wide and leaves a lot of uncertainty on the short term. Neutral rating maintained,” he said.

In SES results last week, it seemed timing was everything and the green shoots of recovery were clearly in evidence. Further evidence of a big operator turning things around are on Inmarsat’s results. Clearly, the performance in aviation and maritime are a huge boost and aviation, in particular, seems on a strong growth curve. However, the performance in government is a worry. Overall, while these results are not bad, there is clearly still room for improvement, and Inmarsat will hope this will lead to a stronger performance this year.