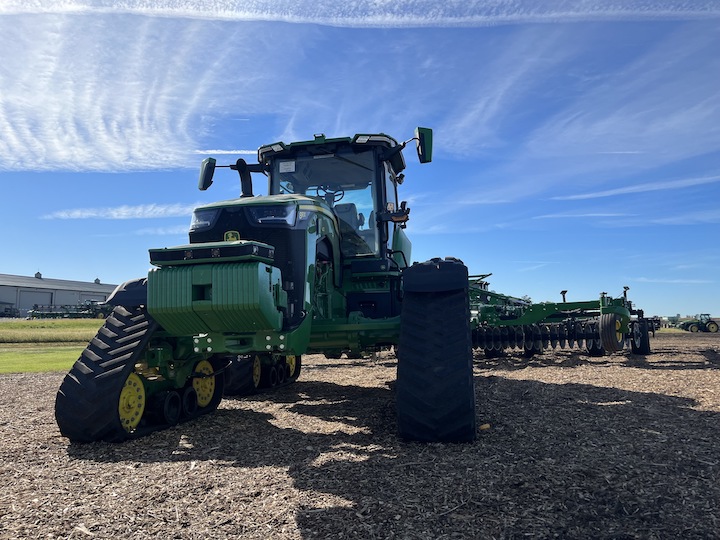 John Deere equipment at a test farm outside of Des Moines, Iowa. Photo: Via Satellite.

DES MOINES, IOWA — John Deere issued an RFP to the satellite industry on Thursday, soliciting a satellite service and terminal that can provide always-on connectivity to its agricultural machines. Execs for the company say connecting machines outside of cellular networks will enable real-time data analysis and autonomous farming that can make Deere’s customers more productive and increase food and fuel production.

On Thursday, John Deere hosted representatives from a number of satcom companies for an industry day at a test farm outside of Des Moines, Iowa, including SpaceX’s Starlink constellation, OneWeb, Hughes Network Systems, and Lockheed Martin.

John Deere offers a large suite of precision agriculture tools and data products including a farm management system, but these can only be used in real-time when a farmer or machine is connected to a cellular network. The company wants to change that by working with the satellite industry.

Deere is seeking a strategic partnership with a vendor or set of vendors to connect both new machines and retrofitted machines with satellite service and ruggedized satellite terminals.

“Terrestrial cell tends to find the business model most lucrative when there are a lot of people and less lucrative when there isn’t,” John Deere CTO Jahmy Hindman told a group of reporters on Thursday, explaining the problem. “Most of our customers operate in regions that are rural, that have low population densities. We have a need to create and craft a connectivity solution that would hopefully be ubiquitous across the surface of the planet, that allows all of our machines to be connected at all times.”

There is not a solution currently on the market that is economically competitive for John Deere, one that would meet John Deere’s needs for terminal cost, and bandwidth and data fees, Hindman said.

“Terminal expense is a key part of it. Largely, it’s because solutions have been crafted around extremely small volumes or military applications,” he explained. “But it’s more than just terminal cost, it’s also data fees. We move petabytes of information and the data structure is going to be important to making the economics work.”

Hindman did not provide a dollar amount Deere is hoping to hit for an affordable terminal, but said Deere needs “an order of magnitude reduction in terminal cost.”

The CTO puts the market opportunity for the satellite industry at about 5,000 new machines annually that could be equipped with a satellite solution and about 40,000 existing machines that are good candidates for retrofit.

He believes this type of volume can unlock new economics for the satellite industry. And John Deere could also bring its manufacturing expertise to the project, as Hindman noted that Deere manufactures its own electronics hardware and could manufacture a terminal.

Hindman said he’s “orbit-agnostic,” but a solution needs to serve a multi-mode connectivity environment with both terrestrial cell and satellite connectivity.

This project will likely not result in John Deere launching its own satellites. “The geek in me really wants to launch satellites, but I’m not sure that’s in our best interest,” Hindman joked.

The company wants to move quickly and hopes to have a solution landed by mid-2024. Deere is open to a resulting solution being sold to other customers, but not in industries that the company competes in, the CTO said.

“We expect the group that is here from the industry to work together to form a solution that’s helpful in our agricultural use cases. We view it as an opportunity to have a partnership with whatever the solution set is that comes out of this over a long period of time,” Hindman said. “We think it’s a market-defining, significant volume relative to satellite communications. We have the opportunity to create something that doesn’t exist, with an economic value that is significant today, and going to grow into the future.”

The company sees the United States and Brazil are the two primary markets for this solution. John Deere’s internal analysis estimates that about 75% to 85% of the United States is covered by 3G or better terrestrial connectivity, and that may increase to about 90% in the next five to 10 years.

But there is not nearly as much coverage in Brazil, a nation that is a major global agricultural producer. John Deere estimates just 20% to 30% of the country is covered, and in the next five to 10 years, only half the country could be covered. Hindman gave the example of the state of Mato Grosso, which is a large producer of corn, soybean, and cotton. Much of the state is outside of terrestrial cellular coverage.

Hindman said John Deere sees a “massive opportunity” to improve agricultural productivity in  Brazil with greater connectivity. “It will be a very long time, if ever, for those geographies to get fully covered with terrestrial cell. Frankly, we’re not willing to wait that long,” he said.

John Deere has a history of working with satellite and its precision agricultural technology is enabled by its proprietary StarFire Network, which corrects public GNSS signals to make them as accurate as needed for agriculture. Reprocessed signals are rebroadcast over Inmarsat’s L-band network. John Deere is one of only a handful of companies that has its own global satellite augmentation network. This network allows John Deere tractors to drive themselves, place seeds, and develop accurate geospatial maps.

Deanna Kovar, vice president of Production & Precision Ag Production Systems, said on Thursday that John Deere has spent much of the last decade digitizing agriculture to put information in farmers’ hands in real-time. The company began connecting all of its new production agriculture equipment in 2011 and now has a decade’s worth of LTE-connected equipment in the market.

This RFP is the next step to broaden the reach of that connectivity, enable more technologies, and thus unlock more value for farmers.

“As we look forward into the 2020s, it’s all about computer vision and machine learning. These aren’t technologies that agriculture created, but they are technologies that agriculture is going to leverage, and we’re excited to be on the forefront of that,” Kovar said. “What you’ll see is how great the technology is, but also how much better we can make it when we can connect it persistently and confidently, anywhere in the world.”

Via Satellite wants to hear industry reactions to the RFP. If you are in the satcom industry and interested in sharing your view, please email rjewett@accessintel.com.