In times of crises, the satellite industry is frequently called upon to provide services that no other can give. When humanitarian agencies ask for help, it is up to this industry to provide rescue enabling services as fast as possible. 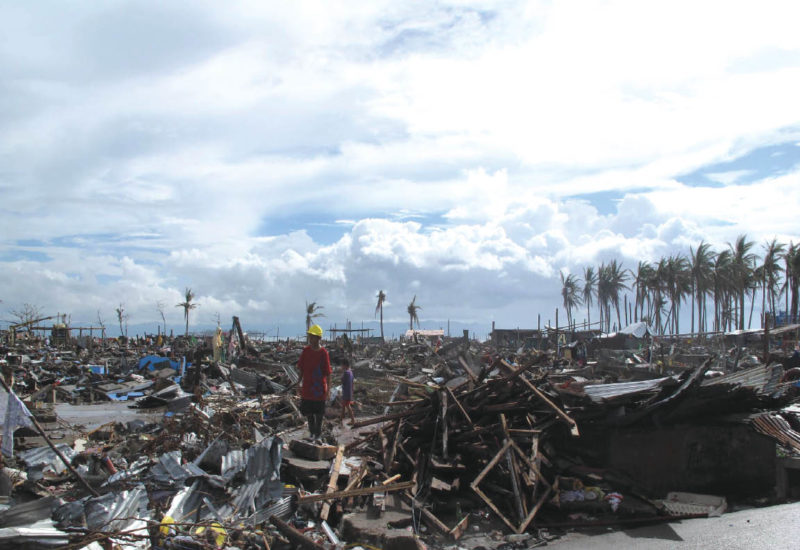 Hailed as the worst storm of 2013, the devastation caused by Typhoon Haiyan in the Philippines was simply beyond comparison. To describe the mammoth tropical cyclone, it has been referred to as a “super-storm.” Other “super-storms” like Katrina or Sandy, though no doubt destructive, — I watched one slam into my home state — they pale in comparison for they, among other details, did not make landfall five times. Sustained winds of 195 miles per hour make Haiyan a contender for the strongest tropical cyclone to make landfall in recorded history.

The world knew this storm would be bad, and warnings based on satellite images poured in before its first contact with land, marking the start of the satellite industry’s crucial involvement in disaster relief for the Philippines.

Preparing is difficult when it comes to disasters of Haiyan’s magnitude. The express reason satellite services are so sorely needed stems from the destruction of terrestrial infrastructure. First responders face a logistics nightmare, being confronted with a myriad of challenges on the ground.

“When the power lines were down, relief workers on the ground had no access to electricity,” says Sanford Jewett, vice president of market development at Thuraya. “They had to improvise by powering up the SF2500 [terminal] units with car batteries in order to establish communication lines quickly.”

This is one of many examples of clever in-situ problem solving done by satellite professionals and humanitarian workers during the aftermath. No two natural disasters are the same, however the relief effort in the Philippines benefited greatly from planning done further in advance.

“Traditionally what you find is an extreme lack of preparedness for the first responders,” says David Hartshorn, secretary general of the Global VSAT Forum (GVF). “When the disaster hits there is a mad scramble.”

The magnitude 7.0 earthquake that struck Haiti in 2010 marked a turning point for emergency satellite response strategies. Interference, congestion and a lack of effective communication between organizations made the attempt at an effective response less efficient than it should have been. Resources were requested, according to Steve Birnbaum, GVF’s chair of humanitarian assistance and disaster response (HA/DR) programs, without an actual understanding of how they would fit into an effective solution; and satellite companies were so compelled to help that they quickly provided an incredible amount of resources, regardless of a plan, to humanitarian workers.

“Some of these non-governmental organizations (NGOs), they may be experts in humanitarian response, but they are not experts in technology so they don’t know how to articulate what they need,” he says. “If some NGO comes to them and says, ‘Hi I’m going to Haiti. There’s no communication and I need a VSAT,’ they didn’t realize that of those three things the only statement that was true was that they were going to Haiti. They didn’t need a VSAT; they needed the ability to communicate.”

The misunderstanding of needs stemmed from a lack of collaboration between professionals in different fields. In addition to a lack of communication between satellite and humanitarian experts, there was also a failure to properly involve local service providers. Birnbaum says the level of destruction was actually overestimated in Haiti to the point that local providers were excluded from the plans to reconnect their own country. Furthermore, by overlooking these companies relief workers missed a shortcut to active, already in place resources that did not have to go through import regulations.

“The worst hit [cellular company] was only knocked down to about 60 percent capacity, and they were back within two weeks up to 80 percent,” explains Birnbaum. “The local Internet Service Providers (ISPs) were complaining that all of these foreign companies were effectively competing against them at a time when they were most in need of sustaining revenue because they were trying to rebuild themselves.”

Three major changes needed to occur based off what happened in Haiti. First, a collaborative disaster response was needed, not a frenzied uncoordinated effort. Second, the response needed to be faster so more lives could be saved. Finally, local companies needed to be involved, not excluded, with the healing of their own countries. 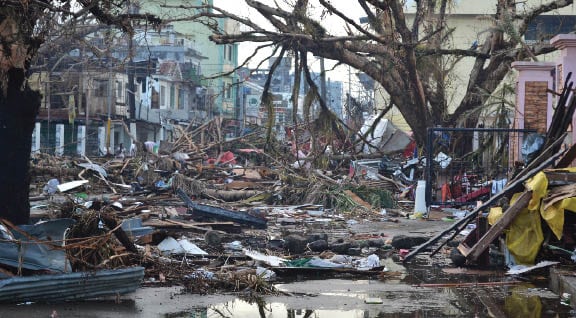 Debris lines the streets of Tacloban, Leyte island. This region was the worst affected by the typhoon, causing widespread damage and loss of life.
Photo: Eoghan Rice – Trócaire / Caritas

By working closely with the United Nations (UN) and other non-satellite groups, the GVF was able to channel the influx of donor support into a much more effective system for the Philippines. Satellite companies, because of their unique position to help, were being asked to assist on a regular basis every time a disaster hit. Birnbaum says this resulted in what the UN coined as “donor fatigue” where a company that stepped up many times before would eventually stop replying to donation requests.

“It’s not financially sustainable for them to be engaged on a purely donation basis,” he says.

To alleviate this fatigue, the GVF began organizing donations to determine which were needed and which were not. It also encouraged NGOs and governments to operate on the same systems. From this, it was possible to pool together the right resources to put an emergency telecommunications system in place without overburdening the industry, which made a huge difference for disaster relief efforts in the aftermath of Typhoon Haiyan.

“SES offered up a full transponder on NSS 11 … but they didn’t have a teleport to service it,” Birnbaum says. “AsiaSat had a teleport, and SpeedCast collocated inside the teleport and offered up an iDirect hub. iDirect stepped up and provided SpeedCast with additional resources to make it happen. Individually, they didn’t have a great solution. Collectively, that had a perfect solution.”

Other organizations also harmonized to provide the right equipment on an as-needed rather than ad-hoc basis. The International Telecommunications Union (ITU) led the deployment of 30 satellite phones from Iridium, 50 GPS-equipped satellite phones from Thuraya, 20 Inmarsat Broadband Global Area Network (BGAN) terminals, and a Qualcomm Code Division Multiple Access (CDMA) base station. Emergency.lu, an initiative created by Luxembourg to provide relief as fast as possible to people in need after seeing the frustration caused by Haiti, provided another communications solution through a public-private partnership between SES, TechCom, Hitec, Luxembourg Air Rescue and Luxembourg’s Ministry of Foreign Affairs. These and other organized responses were able to make better use of the strengths of different companies to take on a helpful role in the Philippines in a timely manner. 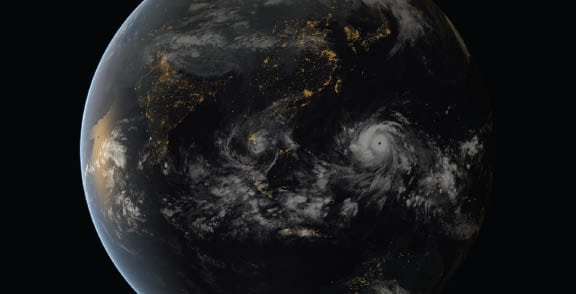 “On Nov. 10, [two days after Typhoon Haiyan’s landfall], three emergency.lu rapid deployment kits, together with four VSAT experts from the Luxembourg civil protection, were deployed to the Philippines,” says Yves Feltes, VP of corporate communications at SES. “The first two kits left from Luxembourg, and the other kit left from the humanitarian response depot in Dubai. The first kit that was deployed was on the roof of the Tacloban city hall on Nov. 12. It was fully operational by Nov. 15.”

Feltes mentions that establishing a second response depot in Dubai was critical to shorten the time between making the decision to act and being on the ground to help. Working with companies that are familiar with fast-paced environments was also helpful. GATR Technologies distributed inflatable antennas with set up times under an hour to emergency.lu and other organizations, also spearheading its involvement in disaster response after Haiti.

“Since the earthquake in Haiti, GATR has maintained contact with disaster response professionals, so when a disaster occurs of this magnitude we connect with the team and decide how we can contribute,” says Roy Priest, VP of sales and support at GATR.

The company acted to provide seven inflatable antennas to the right parties before they arrived in the Philippines. This meant less wasted time and money, as well as more space onboard transport crafts where room was needed for other supplies such as food and medicine.

“GATR provided two company-owned terminals, facilitated satellite airtime, and provided one support person in the Philippines,” says Priest. “These two terminals were used by Cisco Tactical Operations (TACOPS), the other terminals were owned by GATR customers. We were able to establish and coordinate bandwidth for both Global DIRT and the TACOPS teams though Intelsat General, which generously provided the bandwidth and teleport services for both teams for over two months.”

In addition to working more fluidly with other satellite companies and humanitarian agencies, the Haiyan relief effort also saw an increased level of communication with local providers. Many of them did a “reasonably good job of restoring both wireless as well as fiber optic connectivity to places like Tacloban and Cebu,” according to Birnbaum. On the ground, a new approach was taken to involve these companies and even work with them to benefit from their knowledge of the country.

Both Smart Communications and Globe Telecom, the top telecommunication providers in the Philippines, offered free service in Tacloban City, Aklan, Antique, Capiz, Leyte, Northern Cebu and Samar. Birnbaum says there was “regular participation” from both companies at the UN’s Emergency Telecommunications Cluster meeting and “continuous communication” from other local telecoms and service providers. Where local companies were still operational, relief workers tapped their resources to provide connectivity. Some responders, like emergency.lu, focused on areas where local telecoms could no longer offer service; others worked closely with Philippine companies to improve their existing solutions.

“Smart Communications … reached out to [Thuraya] as well as the local government agencies almost immediately to extend assistance,” says Jewett. “Within hours of the breaking news of the typhoon, Thuraya also donated airtime and equipment directly to relief organizations through our service partners Astrium, IEC and Optus.”

Thuraya worked with Smart Communications to create call centers in more than 27 municipalities by using in excess of 70 Marino Phonepal units, SF 2500 terminals, Thuraya XTs and SatSleeves. “Together, Thuraya and Smart have deployed over 100 units of the SF2500, SatSleeve and the Thuraya XT to Philippine government agencies as well as relief organizations, such as the Red Cross, to help establish critical communication channels and facilitate relief coordination efforts,” he adds.

Getting Back to Normal

The damage from Typhoon Haiyan will take years to clean up, but the role of external satellite companies has, for the most part, come to a conclusion. Emergency.lu operated its terminals from Nov. 15, 2013 to Jan. 8 2014, and offered free Internet connectivity from Dec. 28 until the day before dismantling the terminal. The Cisco TACOPS terminal in Guiuan was in operation from Nov. 21 until Jan. 18, a span of eight weeks. Global Dirt’s terminal operated in Tacloban from Nov. 24 2013, until about Jan. 14, according to Priest, and GATR’s Borongan terminal closed down on Jan. 26. The GVF HA/DR program’s coordinated service is considering continuing as a paid service.

Having a timed response helps to mitigate donor fatigue and makes the industry ready to play its ever-needed role in disaster relief. More companies offered to assist in the Philippines than could actually be used, which is a good sign for relief workers, and local companies did not close shop because of foreign competition. Satellite companies learned a valuable lesson in Haiti, and hopefully learned a lot from the Philippines as well. Though we hope the next disaster is far, far away, when it does strike, it is good to know that the industry will be ready.