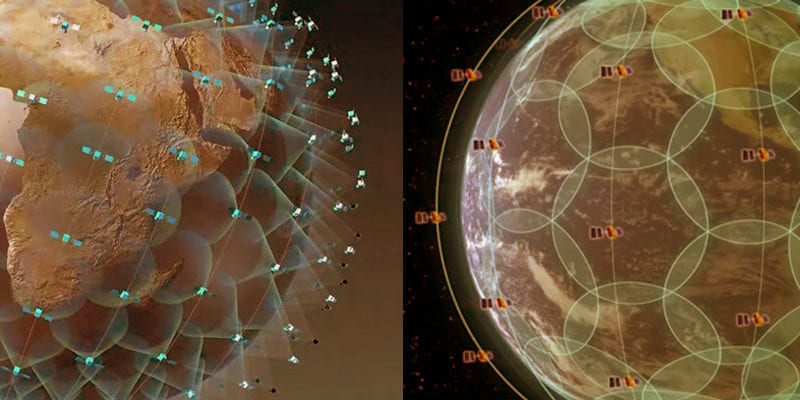 Iridium and OneWeb entered into an MoU to develop a combined service offering from Low-Earth Orbit (LEO) that could potentially include ground equipment that is compatible with both operators’ constellations, the companies confirmed at Iridium’s annual partner conference. The unique service would combine Iridium’s Certus L-band service with OneWeb’s Ku-band service for what is being described as a, “complementary, full-service option for applications such as heads of state comms, critical tactical services, maritime, disaster response and more.”

Iridium spokesperson Jordan Hassin told Via Satellite that the MoU with OneWeb is still in the early stages, so no timelines on service launch have been established. In regards to specifics on the ground segment collaboration mentioned in the announcement, Hassin said, “These developments are all about potential. Our joint partners, such as terminal manufacturers, may elect to design joint-terminals that host both technologies, or we could explore ways to make it easier to bundle or co-market our services. Ku-band and L-band services are very complementary and L-band today will join Ku/Ka band terminals as a companion service regularly.”

OneWeb CEO Adrian Steckel said that the offering was conceived to deliver more benefits for both customers and the operators’ distribution partners. “By combining the strengths of our services, we can ensure our partners are able to deliver the most innovative, seamless services to their subscribers across many markets, and in all the places that don’t yet have access to the internet,” said Steckel.

With the first six satellites already launched, OneWeb will begin monthly launches of more than 30 satellites per month starting in December enabling OneWeb to provide partial service in late 2020 and global coverage in 2021. Iridium began launching its second-generation Next constellation of telecommunications satellites in 2017 and launched commercial service in 2018. The Virginia-based operator completed the network of 66 active satellites (plus nine in-orbit spares and six on-ground spares) in January 2019. Iridium CEO Matt Desch was recognized as Via Satellite’s Executive of the Year for this achievement .

When interviewed after receiving the award, Desch hinted that the next big opportunity for Iridium would revolve around its Certus L-band technology platform, which launched in January 2019 with the capability to scale to unique device speeds and requirements. “[Certus] won’t compete with the commodity broadband services, like existing Very Small Aperture Terminal (VSAT) players or what new LEO players are looking to do, but it will be able to be very effective, very low-cost, and very successful in filling an important niche in the market,” said Desch. “I don’t think people appreciate the power of being able to optimize our L-band services scaled down to applications that can be tens of dollars in cost, but still be able to provide much higher speeds than today. So, we can start adding richer data streams such as pictures, video, and messaging capabilities in their native platforms, and email in its most broad form.”

“This new breed of device is the start of a shift in what defines small-form-factor satellite communications technology,” said Desch. “These are highly mobile, lower-cost solutions that feature native IP technology at speeds capable of delivering a true internet, email, high-quality voice, photo and even some video capabilities. When you combine that with our truly global coverage, we’re creating a cost-effective and reliable ecosystem of new products in a new L-band speed class, midband, that is unlike anything that exists from the satellite community today.”

Interestingly, this partnership announcement comes just months after former OneWeb COO and Senior Vice President (SVP) Suzi McBride left the company to return to Iridium. McBride sat down with Via Satellite for an interview shortly after assuming her new role. When asked whether or not she would be competing with her former employer, McBride highlighted the synergies between the two operators. “Iridium has a unique niche in its customers, the lower bandwidth, two-way remote communications, and it being a global system. I don’t think they’re necessarily big competitors — have the L-band and they’re in Ka- and Ku-band. It’s more about how we can use what we have in our niche markets, and how we can keep growing those markets. I don’t see them as direct competitors, but a different player in a similar market space,” said McBride.