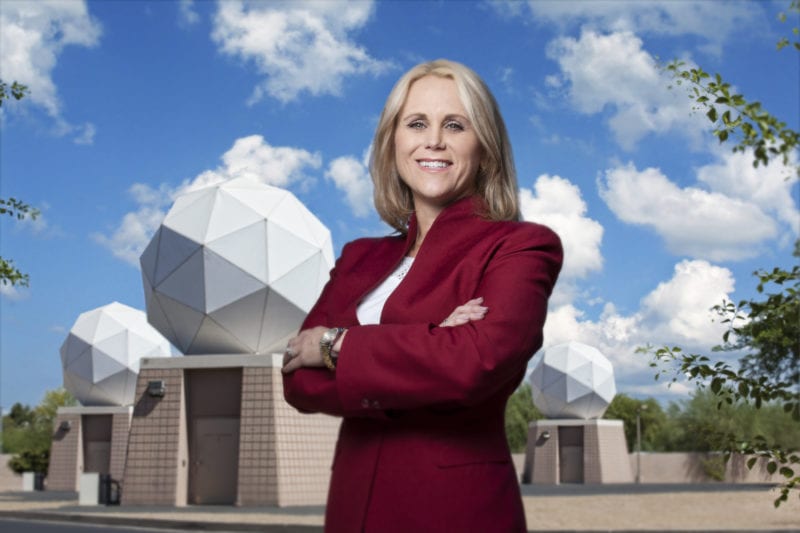 Former OneWeb COO and Senior Vice President (SVP) Suzi McBride returned to Iridium in February at an exciting time for the company. The McLean, Virginia-based operator had just revealed that it completed the $3 billion satellite constellation upgrade campaign known as Iridium NEXT and was ready to operate services at full capacity.

Making a return to Iridium as COO, McBride will lead operations of the Iridium network, including the satellite constellation and associated ground gateways and terminals. This also encompasses all technology innovation on Iridium’s new network, including the development and manufacturing of subscriber equipment, new services, and applications.

In an exclusive Via Satellite interview, we sat down with McBride to talk about her return, her objectives for Iridium, and where she sees the satellite industry moving in the future.

VIA SATELLITE: What made you decide to come back to Iridium?

McBride: When Matt called, it was perfect timing for me, and excitement about having the next constellation ready and bringing Iridium into the next generation of services and products. This is my third stint. Iridium is in my blood, and I believe in the system and what we’re doing. So, when I got the opportunity to come back, I jumped at it.

VIA SATELLITE: It is somewhat unusual to go from Iridium, to OneWeb, then back to Iridium? Why did you leave OneWeb so early into its life?

McBride: I don’t think I left early. I’m proud of what I accomplished there, and I left them at a good time where they’re set to move forward. There’s a really good team that set-in place, and to have the opportunity to come back to Iridium in this roll, was a great opportunity for me — for my career, and for Iridium. I could add a lot of excitement, and understanding in how everything could play well moving forward.

VIA SATELLITE: What are your most excited to contribute as COO of Iridium?

McBride: There are two areas. One, is getting the team to shift gears — we just completed a huge milestone of building Next, which I was part of in the early parts. But really, shifting the team and the focus away from what we just accomplished and moving to the next layer. What’s the next big thing? And, getting us to focus on operational excellence. How do we take the system and find ways to be creative — like how did with our first system, Block 1. We found new services and products that were never imagined. So, it’s about taking this to the next level, and working with the team to shift their gears and thinking, and to be creative in how we can expand even further on what we’ve already put in place.

VIA SATELLITE: Do you believe the cultures of OneWeb and Iridium are very different? What learnings can you take from OneWeb back to Iridium?

McBride: There are similarities and differences – they’re different companies and different states of companies, in terms of where they’re at. I think I could bring a new energy in that refocusing and shifting of the company, especially in the operational team. There’s a lot of employees who have been here for a long time because they enjoy what we’re doing at Iridium. They believe in the services that we’re providing to our ultimate customers. So, it’s more about capitalizing that and moving it forward, and keeping everyone energized and excited about the future here.

VIA SATELLITE: Given that OneWeb and Iridium will be competing in many areas, are you optimistic for the future of OneWeb?

McBride: They play in different spaces — Iridium has a unique niche in its customers, the lower bandwidth, two-way remote communications, and it being a global system. I don’t think they’re necessarily big competitors — have the L-band and they’re in Ka- and Ku-band. It’s more about how we can use what we have in our niche markets, and how we can keep growing those markets. I don’t see them as direct competitors, but a different player in a similar market space.

VIA SATELLITE: Given that the Iridium Next constellation is now launched, do you see major challenges in your new role at Iridium?

McBride: Not major ones — in having stepped out for three years and coming back in, I’m really impressed with where the team has moved. Not only have they launched the satellite system, but product quality, turnaround times, and network availability have also improved. It’s not just the satellites that have moved forward. It’s not a challenge, but what we need to focus on is keeping that momentum moving, and getting the vision put in place for operational excellence, as well as reenergizing the creativity to take this further to market. We need to grow, expand, and help the sales and marketing teams help our customers — and where they need to go, and how their growth markets look. It’s not a challenge, but just a change in direction we need to do, and helping lead that change in focus, coming back to operational excellence.

VIA SATELLITE: How do you see the satellite industry changing in the next 5 to 10 years?

McBride: Good question. There are a lot of new players that are trying to enter the larger satellite constellation market. I think there are some strong players out there, and others that are still trying to figure out what they’re going to do. I don’t know, honestly. I think it’s going to evolve. I like the innovation that I’m seeing in the satellite industry as a whole. I think it’s getting really commercialized. There’s a lot of innovation — I’ve been to many smallsat conferences out in California, and seeing what some small startups are doing and what the larger guys are doing as well. There’s a lot of innovation coming — it’s still a hard space, as we all know. We just built a $3 billion constellation, and building constellations of that size takes capital. I think it’s interesting to watch, and luckily at Iridium we have the big tech refresh behind us, and we’re now into that sweet spot of now using and capitalizing it. But, we’ll continue to look for innovation and at what people are doing and see if/how that can apply to Iridium, to further push us forward.