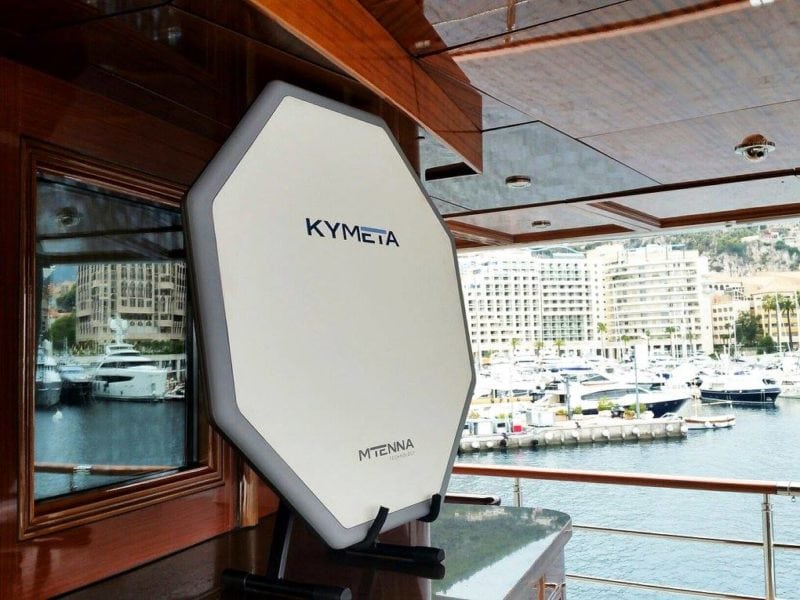 Kymeta could be years away from bringing its products to the aviation market, although it made big strides developing relationships with train and bus operators in 2017. Steve Sybeldon, the company’s vice president of business development and sales, told Via Satellite that while Kymeta still has its eye on aviation it does not expect to launch a product for commercial use for “several years.”

Although the company’s antenna design is quite appropriate for planes, Sybeldon noted that aviation comes with its own set of environmental challenges, such as wider temperature ranges, as well as regulatory speed bumps. “The advantages of the Kymeta product [are that] it’s flat, it’s light, and there are no moving parts. To an aircraft operator that means less weight that they’re carrying, less drag because it’s lower profile, and … less maintenance, which is all very valuable in aviation. ” Sybeldon said. “But it would take us longer to qualify our product to have it installed and operational on the aircraft. Beyond that … we have [to get] FAA certification.”

Sybeldon believes the total opportunity in aviation, while sizable, is much less than in trains or buses or other maritime or land mobile markets. In 2017, Kymeta took the first steps to cracking the land mobile market, deploying its electronically steered Flat Panel Antennas (FPAs) to its first few customers in countries scattered across the globe. In the year ahead, Kymeta plans to build that momentum into fully fledged connectivity services for bus and rail operators, said Sybeldon.

Sybeldon clarified that Kymeta is focusing less on municipal public transportation and more on long-distance travel providers. “Buses and light rail — anything that operates within a large metropolitan area — generally has access to other options, whether that’s LTE through terrestrial systems or some form of Wi-Fi,” Sybeldon said. “We’re looking beyond that to regional transit buses and certainly trains.”

Sybeldon pointed out that trains in particular are much more popular in regions outside of the United States, which proportionately serves a very low number of passengers compared to almost anywhere else in the world. In most places, regional buses and trains cover vast expanses of territory that aren’t served by traditional methods of communication, Sybeldon said. “That means passengers have hours that go by where they don’t have connectivity. Satellite bridges that gap,” he said.

According to Sybeldon, some of the countries where Kymeta has kicked off discussions with regional bus and train operators include Turkey, Canada, Russia and Mexico. The company is also interested in Africa, where rail development is growing, but Sybeldon said Kymeta has not deployed any trial assets there just yet, although it plans to in 2018.

Last month, Kymeta conducted a two-week trek across the continental U.S. as proof of concept of its antenna capabilities and the Kalo internet service. Covering more than 7,000 miles, a Toyota RAV4 equipped with the company’s mTenna Antenna Subsystem Module (ASM) journeyed from Washington, D.C. to Kymeta’s headquarters in Washington state. Although the trek did not uncover anything unexpected, Sybeldon said, the successful journey was further validation of the value the company hopes to bring to the markets it is pursuing. “Anytime we do this we get more information on what obstructions do, whether that’s just the canopy of tall trees as you’re driving through a state park, or the recovery time going through a tunnel where you lose visibility to a satellite,” he said. “Every single one of these trips gives us better data, more information and more detail that we share with our customers.”

According to Sybeldon, one of Kymeta’s major goals in 2017 was to expose its product to a wide group of potential end users, particularly those who hadn’t been able to use satellite in the past. Throughout the year, the company deployed its first few assets to a range of regions and markets, equipping vehicles used for public transportation, agriculture and mining. Now, the company plans to build up its relationship with customers that “have an appetite for a much larger volume of units,” Sybeldon said.

As such, the company is beginning to transition from a focus on research and development to one on operation and installation. Internally, Sybeldon said the company is hiring more employees to interface with customers, and is moving away from an “engineering-centric” position.