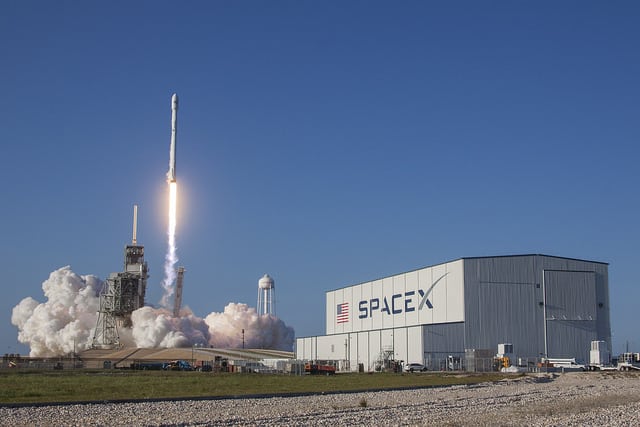 SpaceX is on track to begin launching its broadband constellation as early as 2019, and aims to have the full system on orbit by 2024. In an Oct. 25 testimony delivered to the Senate Committee on Commerce, Science, and Transportation, SpaceX Vice President of Satellite Government Affairs Patricia Cooper reaffirmed the company’s plans to launch the first prototype of its Low Earth Orbit (LEO) broadband constellation before the end of the year and an additional prototype in the early months of 2018.

Cooper also stated that SpaceX expects to begin offering commercial services with as few as 800 satellites on orbit. When fully deployed, the constellation — dubbed “Starlink,” as a recent trademark filing revealed — will comprise 4,425 Ku- and Ka-band satellites operating in 83 planes. In her testimony, Cooper referred to an additional constellation of 7,500 V-band satellites that will fly even closer to Earth than the Starlink system, in Very Low Earth Orbit (VLEO).

“In the future, these satellites will provide additional broadband capacity to the SpaceX system and further reduce latency where populations are heavily concentrated,” Cooper said. “By combining the umbrella coverage of the LEO Constellation with the more intensive coverage from the VLEO Constellation, the SpaceX system will be able to provide high volume broadband capacity over a wide area.”

SpaceX did not provide dates on when it plans to begin launching the secondary constellation.

Cooper emphasized that Starlink will primarily deliver broadband directly to end-users, “particularly individual houses and small businesses,” which will be able to connect to the constellation via user terminals sold by SpaceX. Cooper described the flat-panel terminals as “roughly the size of a laptop,” and noted they will use phased-array antenna beams to track the satellites as they cross the LEO arc. Once deployed, the constellation will be able to provide broadband service at speeds comparable to fiber.

According to an application submitted to the Federal Communications Commission (FCC) earlier this year, SpaceX has already begun testing its Starlink communications links at its corporate headquarters in Redmond, Washington, and will continue tests through to April 2018.

With Starlink, SpaceX hopes to address the “digital divide” that persists across the United States (and globally). Currently, more than 34 million Americans lack access to 25 mpbs broadband service. This disparity is even more salient in rural areas: according to the FCC, almost 40 percent of Americans living in rural areas lack access to “advanced telecommunications capability,” compared to 4 percent of Americans near larger cities. Americans have also long lamented the increasingly monopolistic state of the terrestrial broadband industry, as more than 62 percent of citizens have just one broadband provider available in their region.

During her testimony, Cooper urged the FCC to include satellite systems in the second phase of its Connect America Fund, which will support almost $2 billion in funding to expand broadband infrastructure across the U.S. As it stands, no satellite systems are allowed to participate because they currently do not meet the FCC’s criteria for high speed and — more notably — low latency. SpaceX, however, as well as other companies such as OneWeb, are hoping to change this paradigm with the more advanced capabilities of their Non-Geostationary Earth Orbit (NGSO) constellations.

“This creates a false presumption that all satellite technologies are now and forever unsuitable for consumer broadband,” Cooper argued. “Conflating NGSO systems and traditional geostationary systems would be the same as the FCC prohibiting fiber systems from bidding because dial-up is not fast enough: just because both systems are hard wired does not mean that they are equivalent.”

Cooper also highlighted SpaceX’s belief that systems with more efficient spectrum use should be “rewarded.” According to her testimony, operators investing in more advanced technologies should not be forced to carry an asymmetrical burden when it comes to spectrum sharing. “The Committee should ensure that their rules do not unduly burden more flexible, adaptable systems with the responsibility of spectrum sharing with other less sophisticated systems,” she said.

One of SpaceX’s advantages over some of its competitors in the satellite broadband market is its vertically oriented business model. Currently, the company manufactures more than 70 percent of the value of its Falcon 9 rocket in-house, including the first and second stage propulsion systems, fuel tanks, payload fairings and avionics. Similarly, SpaceX intends to manufacture the majority of each spacecraft without outside investment, Cooper said. This, combined with SpaceX’s low-cost launch capabilities, will allow the company to overcome the “challenges that have stymied past generations that have considered LEO communications constellations,” Cooper said.