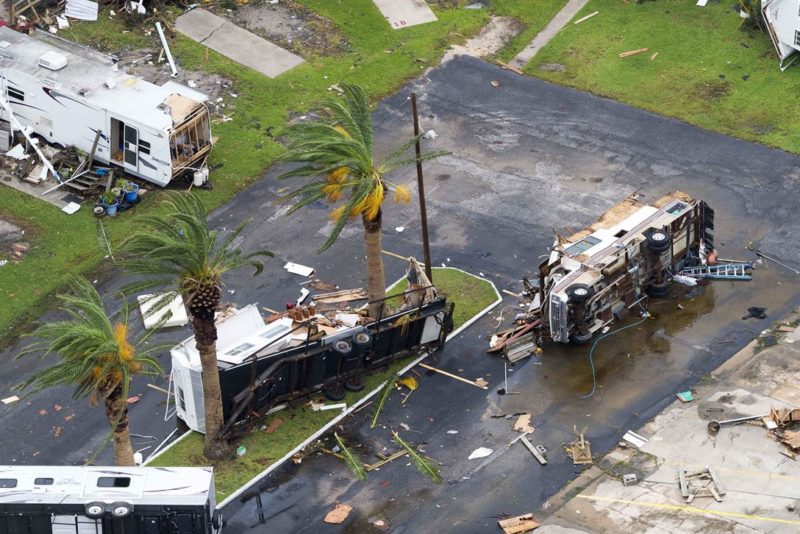 My family’s love affair with Rockport, Texas began in 1958. This quaint fishing village and artist enclave, situated on Aransas Bay roughly 30 miles north of Corpus Christi, is where our family goes to fish, celebrate birthdays, attend festivals, and catch rare glimpses of the endangered whooping cranes that overwinter in the nearby Aransas Wildlife Refuge. It was a gut punch when Hurricane Harvey roared ashore as a Category 4 hurricane the evening of Aug. 25, bringing death and devastation to the Coastal Bend of Texas.

Harvey was birthed off the coast of West Africa, and as it made its way across the Atlantic, Caribbean, and into the Gulf of Mexico, weather satellites tracked Harvey’s every move. Accurate and timely information on the storm’s path and strength was vital to government agencies, relief organizations, and to the general population.

Satellite imagery has been quite useful in the settlement of insurance claims after the storm. A comparison of pre-storm and post-storm images provides documentation of the damage done to an individual’s property.

The National Weather Service reported on its website that Harvey’s wind speed peaked at 132 miles per hour when the storm made landfall. Physical evidence of the wind’s ferocity was everywhere: collapsed aircraft hangars with crushed aircraft inside; travel trailers bent around telephone poles like sheets of aluminum foil; and individual mounds of lumber that used to be someone’s home.

This writer’s eye was drawn to the remnants of a 1.2-meter Very Small Aperture Terminal (VSAT) on the awning of a gas station. Half of the reflector had been destroyed by flying debris, the feed a crumpled mess.

The destruction was complete. Rockport’s businesses, churches, schools, homes, telephone system, power grid, water system, cellular infrastructure, and internet connections all suffered significant damage. Immediately after the storm, it was reported on network television that there was only one working telephone line left in town. 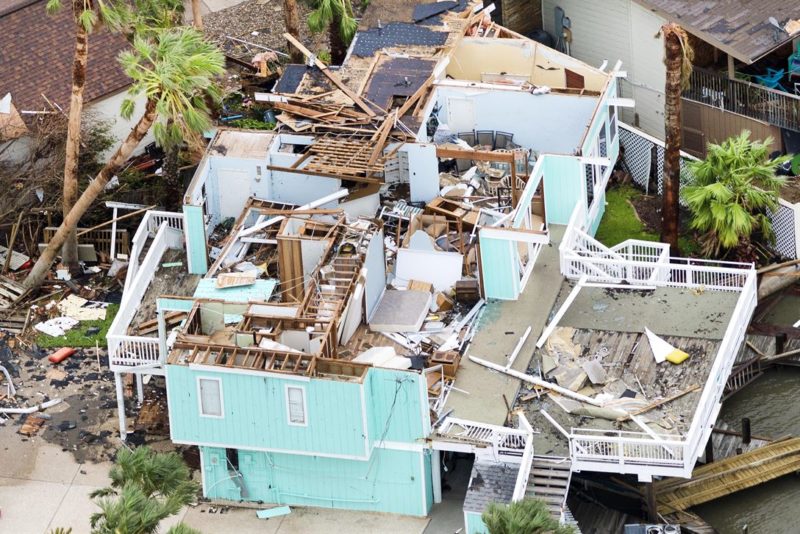 The first task was to fix the city’s infrastructure. Construction crews began clearing trees and storm debris that blocked every road. There were so many power lines destroyed, Rockport Mayor C.J. Wax ordered the city closed to everyone except first responders. A “water boil” advisory went out alerting the population that rode out the storm that the municipal water system had been compromised.

The Federal Emergency Management Agency (FEMA) and the National Guard quickly set up operations in the middle of downtown, adjacent to Rockport’s picturesque harbor. The National Guard used surplus pallets from relief supplies to create a makeshift perimeter in an abandoned grocery store parking lot. Guardsmen gave out food and water to those in need.

FEMA’s command centers were a beehive of activity. In addition to FEMA employees, more than 40 members of FEMA Corp, volunteers who serve a 10-month term of service learning about disaster preparedness, response, and recovery activities, aided residents that needed assistance.

Operation Blessing, one of the world’s 100 largest charities, had been monitoring Harvey from their headquarters in Virginia Beach, Virginia and had already staged food, water, supplies, and personnel in Dallas while the storm was still in the Gulf. The eye of Hurricane Harvey made landfall at 10:00 p.m. the night of Aug. 25, and Operation Blessing’s fleet of vehicles, including a satellite-equipped mobile command center headed for Rockport the next morning.

On station in Rockport, Operation Blessing began providing humanitarian aid and assistance. The organization matched those that wanted to volunteer with those who had a need. Sheila Griffin, deployment manager for Operation Blessing, noted that it had 3,700 volunteers sign up. “This was an unusually high number of volunteers for a town of this size,” she said.

Samaritan’s Purse, an Non-Governmental Organization (NGO) that falls under Billy Graham’s organization, set up operations in nearby Corpus Christi, coordinating closely with Operation Blessing to provide assistance where it was needed.

People came from every part of the country to volunteer. Many folks never registered with any organization; they just showed up and went to work. Food tents popped up in vacant parking lots and church groups, civic organizations, and Boy Scout troops started serving free food to anyone that was hungry. Other volunteers stood on corners, giving away free drinks, ice, and cans of insect repellant.

One group of men from Grace Fellowship Church in Paradise, Texas, recognizing there would be a need, collected donations and then cooked 1,400 pounds of brisket, along with side dishes. They set up shop downtown and served 1,000 people the first day, and continued serving barbecue sandwiches non-stop for six days.

I made three trips to Rockport immediately after Hurricane Harvey, chronicling the aftermath of the storm. As I was leaving for the final time, I noticed activity at the Veterans of Foreign War (VFW) post, which had been completely destroyed. I pulled into the littered parking lot and spoke to the Chaplain of VFW Post 3904, retired Sgt. Andrew Flores of the U.S. Army 10th Mountain Division, who had just gone into the damaged building to retrieve the post’s colors. Flores informed me that all of the VFW posts in the immediate area had volunteered their buildings so Post 3904 could hold meetings. Flores also said that he and Post Commander Jimmy McCombs had queried all of the members and they voted overwhelmingly to hold meetings instead in a tent in the parking lot. VFW Post 3904’s steely resolve to endure mirrored the feelings of everyone I spoke to in Rockport after the storm.

Rockport, Texas, a community of 20,000, suffered tremendous damage from Hurricane Harvey and it will likely take years for the town to fully recover, but the townspeople are resilient and are already looking to the future.

Unlike the aftermath of Hurricane Celia in 1970, the last major storm to hit South Texas, satellite technology played a major role in Hurricane Harvey. Satellite imagery was significantly important, both before and after the storm. In addition, on-the-scene news reporting, ad hoc data communications to support government and relief organizations, and the restoral of banking and retail point of sale networks couldn’t have happened without satellite technology. Sometimes you have to view life through the lens of a disaster to appreciate how much we rely on satellite communications.

Greg Berlocher has been active in the satellite industry for 25 years and is the president of Transcend Global Networks LLC.