[Via Satellite 07-06-2015] Spacecom is confident that its Africa business will continue to drive new growth as the company ramps up capacity in the region. In late 2014 the operator teamed up with Eutelsat to cross-commercialize Ku-band capacity; this year Spacecom has signed deals with notable broadcasters in Nigeria and other African nations. Spacecom’s next satellite, Amos 6, will have 39 Ku-band segments and 24 Ka-band beams, bringing Ka-band spot beams to Africa and opening new markets in Western Europe.

“In 2014, Spacecom generated $110 million in revenue with an excellent geographic spread, and in 2016 we are again looking at Asia and Africa to be big contributors to our growth,” David Pollack, CEO of Spacecom, told Via Satellite. “In 2014, [Earnings Before Interest, Taxes, Depreciation and Amortization] EBITDA came to over $70 million. During the first quarter of 2015, the company’s revenues came to over $27 million and order backlog — important for Spacecom’s overall planning — is significant and amounted to over $700 million.”

Last year the operator provided broadcast services for the Confederation of African Football’s (CAF) Orange African Nations Championship (CHAN) — Africa’s annual football championship competition — in South Africa from the Amos 5 satellite. This year Spacecom, in partnership with SatLink Communications, provided Pan-African distribution services for the Orange African Under-20 Football Championship competition in Senegal. To further the momentum in Africa, Spacecom deftly relocated capacity from an existing satellite to the region.

“One thing we have also done in Africa during the past year is to move one of our Amos 4 beams into East Africa. At the 65 degrees east orbital position, Amos 4 is ideally positioned to provide a communications link between Asia, Africa and the Middle East. The broadcast and broadband businesses in Eastern Africa and Sub-Saharan Africa are exciting and moving in the right direction, especially as more of the countries turn to digital broadcast,” said Pollack.

Amos 6, the successor to Amos 2, is scheduled to launch aboard a SpaceX Falcon 9 rocket. Once launched, the satellite will use electric propulsion to reach its 4 degrees west orbital position with the Amos 3 satellite. Under construction by Israel Aerospace Industries (IAI) the new satellite is larger than both Amos 2 and 3 combined and has a design life of 16 years. The satellite’s footprint covers Europe, Africa and the Middle East.

Pollack said the company’s hybrid satellite-cellular service is also driving new business. The solution uses satellite for downloading data while relying on cellular or other terrestrial data networks for Internet upload requests and data offload. Spacecom connects the cellular network and satellite to a central hub hybrid platform on one side and a hybrid terminal at the customer’s location. 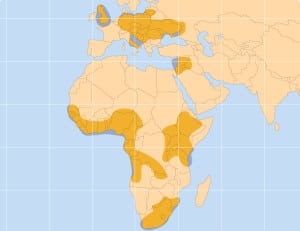 “With more citizens throughout Africa using their phones and other smart devices in the digital space, this service will be a linchpin for service providers and operators who need to maintain service in far flung regions, as well as in urban areas,” said Pollack, adding that, “in Africa especially, this hybrid solution is finding a receptive audience due to the growth of cellular telephony in outlying and rural regions.”

The Amos 6 satellite’s capacity will be able to entertain dual-play with Ultra-HD content to its markets. Pollack said Ultra-HD is trending toward the same behavior as HD, with larger television screens fueling a concurrent uptick in video quality. Citing an IHS industry report, Pollack said the first quarter of 2015 showed a 400 percent increase in Ultra-HD televisions shipments. Though these are early adopters, the rise in sales is encouraging for mainstream adoption. Still, Pollack said Direct-to-Home (DTH) operators need to take strategic steps in this direction too, as the majority of today’s digital receivers do not support Ultra-HD reception.

Pollack said Spacecom continues to see growth in HD channels, and that In-Flight Connectivity (IFC) is another high-potential market. The Internet-of-Things (IoT) space will likely take more time to mature, he said.

“IoT … is very much a data-driven application and thus not until a large number of homes, offices, stores and commercial operations are equipped to handle IoT, will the satellite industry be involved. A hybrid satellite-cellular solution will be a part of the solution, but at this point we do not envision an extremely large role for the industry,” he said.

The Amos fleet currently consists of Amos 2, 3, 4 and 5 satellites. After the Amos 6 satellite replaces Amos 2, Spacecom plans to continue upgrading its fleet. Though the company has released limited details about other upcoming spacecraft, two more are being actively pursued. These spacecraft will help Spacecom reach its goal of covering 80 percent of the world’s population by 2020.

“As Spacecom moves toward making Amos 7 and Amos 8 realities, we are studying various methodologies for bringing their creation to fruition. Right now we are working on plans that highlight both organic growth and growth via joint venture, partnership and other deals. We are looking to move forward with interesting opportunities and when we reach the right business levels for them to go forward, we will do so. Our goal is to grow in long term, high demand markets,” said Pollack.