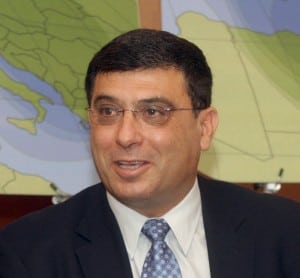 [Via Satellite 06-12-2014] Spacecom has set a goal of covering 80 percent of the world’s population with its Amos satellites by the end of this decade. The company is riding a wave of new deals that are bringing the Amos satellite name to previously untapped markets. For this, Spacecom recently doubled its office space in order to accommodate the need for a larger operational base with several new employees.

“We have entered into new deals for added capacity in Central and Eastern Europe at the 4 degrees west ‘hot-spot’ on Amos 3 and, after its launch in 2015, to the Amos 6. We are also adding to contracts on Amos 5 over Africa,” David Pollack, president and CEO of Spacecom told Via Satellite. “Amos 4 at 65 degrees east is continuing its growth with new clients coming online from Asia and Russia. This is exciting because Asia is a brand new market for us as the satellite assumed its final position only in early 2014.”

Telecom operators are playing a more prominent role for Spacecom by using Amos satellites for data backhaul. Pollack noted that traditional broadcast customers are shifting from analog to digital technologies and that the company’s satellite broadband service is gaining traction in new markets. Spacecom has been focusing heavily on reaching emerging markets and creating relationships with partners around the world, notably in Asia.

“As we enlarge operations, we continue to send our technical and operational experts around the globe to work locally with our partners,” he added. “By working closely with local partners we are better able to engage our customers, and this has proved an excellent method in bringing in new business and maintaining and expanding existing clients.”

Part of Spacecom’s strategy to reach the 80 percent goal by 2020 is to continue to capitalize on the 4 degrees west hot spot, which is the current position for co-located satellites Amos 2 and Amos 3. The upcoming Amos 6 satellite will replace Amos 2, which was launched in 2003 and is nearing the end of its service life. The new satellite will be larger than both Amos 2 and Amos 3 combined, boasting 39 Ku-band transponders and 24 Ka-band spot beams.

“As we look into the future, Amos 6 will bring power and satellite coverage not only to Central and Eastern Europe, Africa and the Middle East but also to a new area for us: Western Europe. With growing connections between Western Europe and Africa, this is going to be very important as we focus on bringing better Internet broadband to those regions,” said Pollack. “[We are] also seeking additional orbital positions for expansion, and holding discussions on them. Amos 6 will not yet take us to 80 percent, this will be after we will launch a satellite to cover Latin America.”

Amos 6 is slated to launch in 2015. The satellite is now fully financed and Spacecom is actively pre-selling capacity prior to launch. A major design change for this satellite was the decision to use electric propulsion. Pollack said the sheer size of the satellite and the number of transponders influenced the decision. All of the previous Amos satellites are smaller.

Amos 5 is currently covering Africa using a fixed pan-African C-band beam and three steerable Ku-band beams. Spacecom plans to co-locate a future satellite, designated Amos 7, with Amos 5. Pollack expressed confidence that, as terrestrial connectivity in Africa grows, it will fuel rather than detract from the demand for satellite. 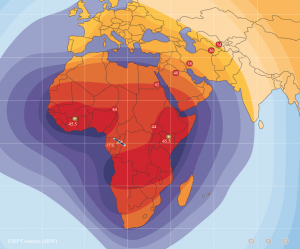 “Spacecom has always posited that more fiber in Africa is good for satellites,” said Pollack. “As more users become familiar with advanced communications and with better applications due to the arrival of more fiber, there will be increased demand for these services. As communications providers reach the conclusion that they need these services in areas only reached by satellite, they will be willing to work with us in providing these services all around the continent. Thus, demand created by fiber pushes the entire industry up and Amos 5’s position at 17 degrees east with capacity to serve all of Africa creates excellent conditions for us.”

Covering Latin America is the final leg in reaching Spacecom’s coverage goals. To reach this geography, the company is planning a presence through Amos 8. Though the details of this satellite, along with those of Amos 7, are not concrete, Pollack said Spacecom is progressing toward them.

“Latin America is growing as each country works to develop its future strategies with regards to communications regulations and structure,” he said. “We are looking at a number of these and other markets to gauge what the future holds and what bands will be required to generate exciting business opportunities.”