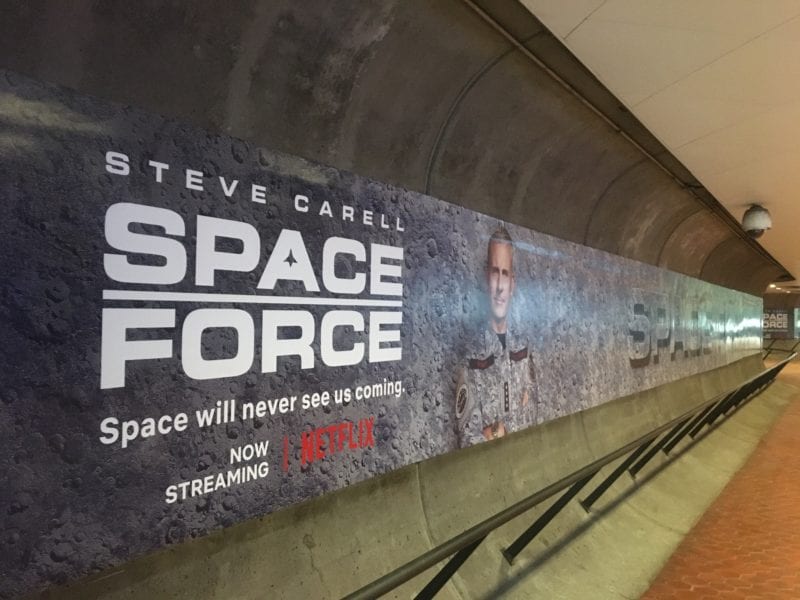 Calling all space nerds – Netflix’s new “Space Force” may not make the list of 2020’s best  shows, but smart and accurate details relating to the military and commercial space industry will invite plenty of chuckles.

From the day it was announced nearly two years ago, the new series by “The Office” creators Steve Carell and Greg Daniels was widely anticipated by aviation and space geeks, with many debates happening on Twitter over whether the show would be a complete farce or have some basis in fact. The fact that it overshadowed the Trump administration’s announcement to form an actual U.S. Space Force certainly didn’t reduce expectations — Netflix teased the show’s development just days after the U.S. government revealed plans to build the new service in August 2018.

“Space Force,” which was released May 29 and spans 10 30-minute episodes, follows the fictional former U.S. Air Force Deputy Chief of Staff Gen. Mark Naird, played by Carell. In the first few minutes of the show, Naird pins on his fourth star, expecting to take over his old boss’ position as the top Air Force officer. Instead, he is sent to Colorado to lead the newest military branch, the Space Force. He finds himself struggling to meet the expectations of a mercurial commander in chief who tends to insert himself into the Space Force’s minutiae, and to balance a “frenemy” style working relationship with Dr. Adrian Mallory, a science advisor played by John Malkovich, who prefers exploration efforts over military campaigns in space. And of course, Naird is also tackling marital issues and father-daughter relationships in a new home, while trying to maintain the U.S. military’s advantage in space over peer adversary China. Such is the life of a four-star general and family man.

The highlights of the show are truly the inside jokes for aerospace nerds. There are plenty of indications that the showrunners did their research to make the satire feel authentic to those in the industry. They employ the correct jargon most of the time, such as “left of launch.” The Air Force personnel onscreen wear the Operational Camouflage Pattern (OCP) uniforms that the actual service began transitioning to last year. The first 10 minutes of the show included a one-off line referring to the Air Force’s recent light attack aircraft experiment, which immediately piqued my interest as a reporter covering those developments in and out over the past three years.

The show’s overarching conflict, which follows the Space Force competing with China to get “boots on the Moon,” shows that despite the jabs at the mere premise of a military branch dedicated to space, they recognize that there is true competition happening among the stars.

Even some elements of Naird’s character seem pulled from reality. He mentions in passing that he has been “chased through the Serbian woods by the Bosnian army.” That line must be somewhat inspired by the real-life shootdown of current Air Force Chief of Staff Gen. David Goldfein in 1999 over Serbia, when he served as an F-16 pilot participating in Operation Allied Force.

These details and more make the show worth watching if you’re in the know. But there are also plenty of plot points that would make no sense outside of fiction, including a hilarious but absurd effort to employ a space monkey to fix a satellite on orbit. And as amusing as the “Space Force” show’s military fatigues are with their moon surface pattern, the 2019 film “Ad Astra” featured swankier space uniforms.

There are certainly episodes where the plot lags. Many of the side stories are amusing, but less compelling than the back and forth between Carell and Malkovich’s characters. The shining exceptions are the interactions between the characters played by Tawny Newsome – an Air Force combat helicopter pilot who dreams of going to space – and Jimmy O. Yang – a scientist working on Dr. Mallory’s team. The show’s cast is full of comedic heavy hitters, who largely land the jokes with aplomb and pull the show through some shaky plot devices.

The season ends on a sizable cliffhanger, setting viewers up for Season 2. Despite a few stumbles, “Space Force” is worth seeking out, and may end up a cult classic among space nerds, the way the 1998 film “The Pentagon Wars” has become a beloved film for military acquisition professionals.

And what a trip it will be, to watch the Netflix-based space service develop and mature side by side with the real-life Space Force. Which one will truly win over the hearts of the American public? We’ll have to wait and see.