In a May 30 press conference first reported by Space News, the company detailed plans to invest $420 million dollars into the system and starting pilot services in 2023. The system is expected to be in service in 2025 with 1,000 satellites, and to offer 6G satcom services by 2030 with 2,000 units in orbit.

According to the business roadmap, the company plans for the system to serve land and maritime applications first, then aircraft and Urban Air Mobility (UAM) applications in 2025, and 6G service in 2030.

This plan is part of a capital increase of 1.2 trillion South Korean won ($1 billion) through issuing new shares.

Hanwha Systems acquired the business assets of aviation satellite antenna company Phasor in 2020, after the company filed for bankruptcy in the United Kingdom. The company is now a subsidiary of the larger company called Hanwha Phasor. In addition, Hanwha Systems is a recent investor into mobility antenna company Kymeta Corporation.

“Hanwha Systems’ goal is to provide the best quality LEO communications services by taking advantage of its more than 20 years of military satellite communication business experience and the competitive air platform satellite antenna technology, which will be the integral part of Communications On-The-Move,” Choi said. 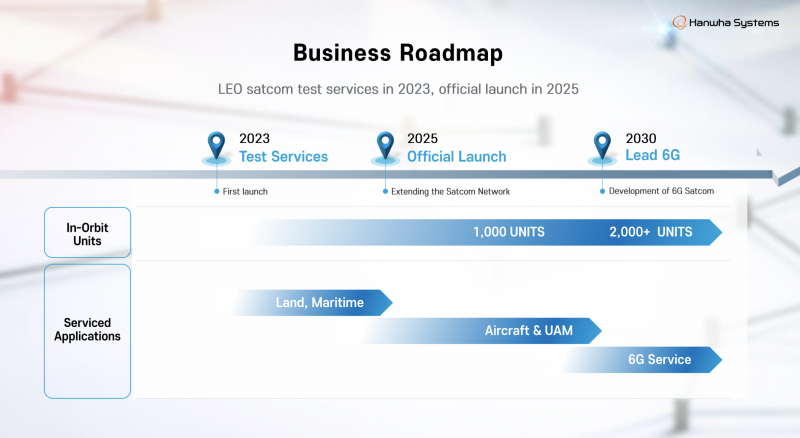 He described the benefits of Hanwha Phasor’s technology as a thin electronically steerable antenna with signal processing done by semiconductors developed in-house that will accelerate response time. Hanwha Phasor’s products will be developed as modular structures of about A4 size that can be configured in three dimensions to airplanes or naval vessels.

Hanwha Systems will focus on inter-satellite link technology for the system, and Hanwha Phasor will focus on the antenna terminals.

Hanwha System is also investing in Urban Air Mobility (UAM), or flying vehicles that will provide transportation in urban areas in the future. THe company sees synergies between its UAM investment and LEO investment.