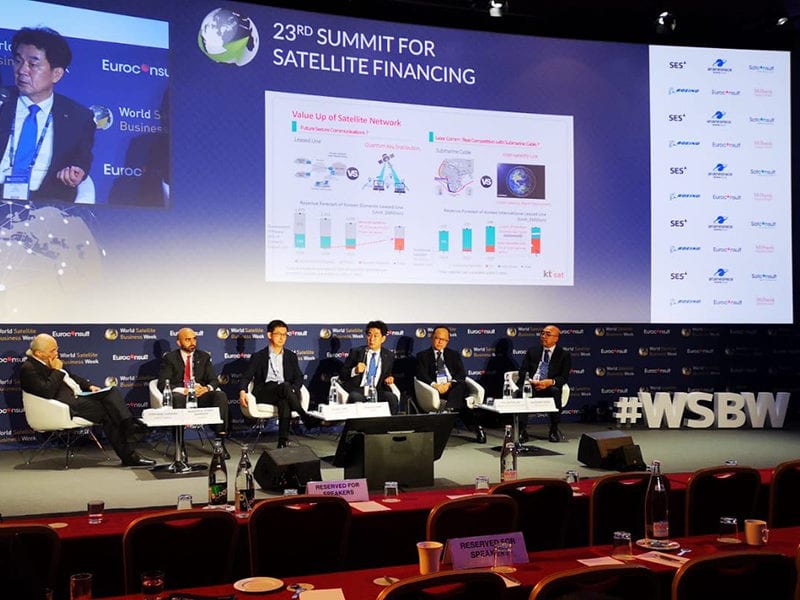 In one of the signature opening panels at World Satellite Business Week (WSBW), CEOs from a number of regional operators debated what is in store for operators in a 5G world. The picture painted was one of oversupply, declining video markets, as well as uncertainty about the future. Masood Sharif Mahmood, CEO, Yahsat, admits that the operator has been operating in a “challenging” environment, and in a market like Asia — which Yahsat is targeting through Thuraya — getting market access is an issue. The company is now focusing on its core competencies as it looks to establish a strong broadband business.

Mahmood also disputed that everything was great for telcos, and not so good for satellite. “From the telecoms industry, it is not as rosy as perhaps you think. They are facing challenges.” Its acquisition of Thuraya is a key part of its strategy and Mahmood suggested that the operator would look to start the process of investing in a new  Thuraya satellite before the end of the year.

For Asiasat, it has been a landmark year as the company has finally gone private. Roger Tong, Asiasat’s CEO also spoke about the 5G market in Asia and what it could mean for an operator like Asiasat. He said, “5G is a threat to broadcasters. Aside from impacting consumer behavior, 5G does impact the overall usage. It impacts us. The good thing about 5G is it consumes C-band capacity. It will impact our business in a different way.”

Like Mahmood, Tong said even mobile operators are unsure on 5G when it comes to Return on Investment (ROI). He said, “When you talk to mobile operators, they are not sure on the financial return on 5G investments. We still don’t know how 5G will bring benefits to us. Backhaul for us is really crumbs. I don’t think Asia is very different from the rest of the world.”

In terms of future investments in satellite, Asiasat seems to have put plans on hold. It was looking seriously at procuring a High-Throughput Satellite (HTS) two years ago, but has since delayed these plans. Tong believes despite some of the doom and gloom going around the industry, things are not quite as bad as some think. He added, “Satellite operators are talking themselves down. There are a lot of challenges ahead of us. But, I believe the satellite industry is healthy, but it does need to re-invent itself. We have to change where we are strong. Our capacity is being reduced by the 5G impact. There is no lack of technology and investment. The question is what is the core competency of a satellite operator? This is the question.”

Yay Chyong Lim, COO, Measat spoke of operator’s renewed focus on broadband which will come through its investment in the new Measat-3D satellite. The satellite will have an HTS payload to cater for broadband demand. “The program (Measat-3D) itself is progressing well. Malaysia has a new government, and they are very focused on getting people connected. The population is not that big. 3-5 percent of people in Malaysia are not connected either through fiber or terrestrial. No question, there is a connectivity plan. In Malaysia there are areas where it is challenging to lay fiber. Measat will play a major role to complement terrestrial in Malaysia.”

Measat-3D will offer the operator a significant ramp-up in capacity. When asked about the potential for Measat to play in other markets in the region such as Thailand, Lim admitted the operator was more focused on its home market. He said, “There are a number of opportunities in the broadband market in Malaysia. We went back into the broadband market in 2011 with Ipstar. We are able to unlock some of those opportunities. We are focused on what we are doing in our home market. However, there is a possibility we can look at more regional opportunities going forward.”

In terms of the video market, Lim admitted, like most other operators on the panel, that Over-the-Top (OTT) was having an impact, and Astro, the Malaysian Direct-to-Home (DTH) operator, was carefully assessing what its capacity needs will be the future. He admitted Measat is seeing an impact on what could be future business here.

Baozhong Huang, executive vice president, APT Satellite, also spoke of an oversupply of capacity in the marketplace. He spoke of the operator’s plans to create a global network, although this is likely to be done in corporation with others. He said, “It is a long-term plan in order to be very successful, we need to cover the whole globe. We have focused initially on Apstar-6D and making this a success. But, we need other orbital slots. It maybe to get access to other orbital slots, we need to co-operate with others. We are looking to have discussions with others on this.” It has been a busy day for APT Satellite. It has also announced today that it has teamed up with Gogo to provide In-Flight Connectivity (IFC) service for Chinese airlines with Gogo’s satellite connectivity solution 2Ku.