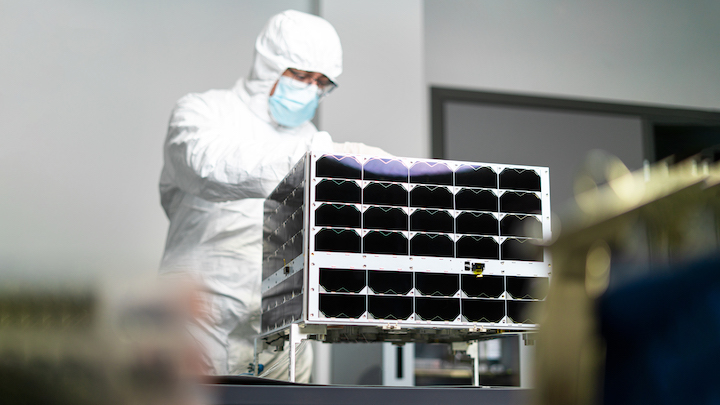 NanoAvionics is expanding its flagship satellite bus line with a larger bus to meet customer demand for microsats. The company announced Wednesday it is adding the MP42H and the MP42D to its product line based on its flagship MP42 bus.

The MP42D is double the size of the MP42 bus, and can accommodate payloads of up to 145 kg for a total satellite mass of up to 220 kg. The company said this size can support advanced missions and applications, and it can also be used as an orbital transfer vehicles (OTV) for satellite rideshare providers.

The smallest bus in the range is the MP42H and can accommodate payloads of up to 22 kg.

NanoAvionics CEO Vytenis Buzas told Via Satellite this expansion is the logical next step to support the company’s customers, who want more capable and more flexible satellites. The company started out manufacturing the 3U nanosatellite bus, but over time customers have advanced and gotten away from cubesats. As customers have advanced and launch costs have gone down, the company has consistently added larger buses like the 12U and 16U nanosatellites, and then introduced the MP42 microsat last year.

“We were listening to the market and going where the market wanted to go,” Buzas said. “The bigger the vehicle, the more sophisticated subsystems you can accommodate there. More redundancy, better durability, higher power resources, higher computational resources, communication, much more room for deployable elements. And of course, bigger payloads.”

A number of customers have already purchased the new bus sizes. Overall, the MP42 is becoming more popular than NanoAvionics flagship product, the M6P 6U bus, Buzas said.

NanoAvionics customer business cases are maturing and the company is evolving to keep up with demand. The company is going through the process of being acquired by Norwegian company Kongsberg Defence & Aerospace, which Buzas said will give NanoAvionics the support of a larger company and help it scale.

“The market as a whole is getting more mature,” Buzas said. “A lot of new businesses are starting to generate tangible revenues. We’ve been doing a lot of experiments on cubesats for the last 10 years, then initial business case demonstrations based on larger cubesat form factors. Finally, we are having companies deploy businesses based on smaller microsats. People are starting to generate real revenue.”