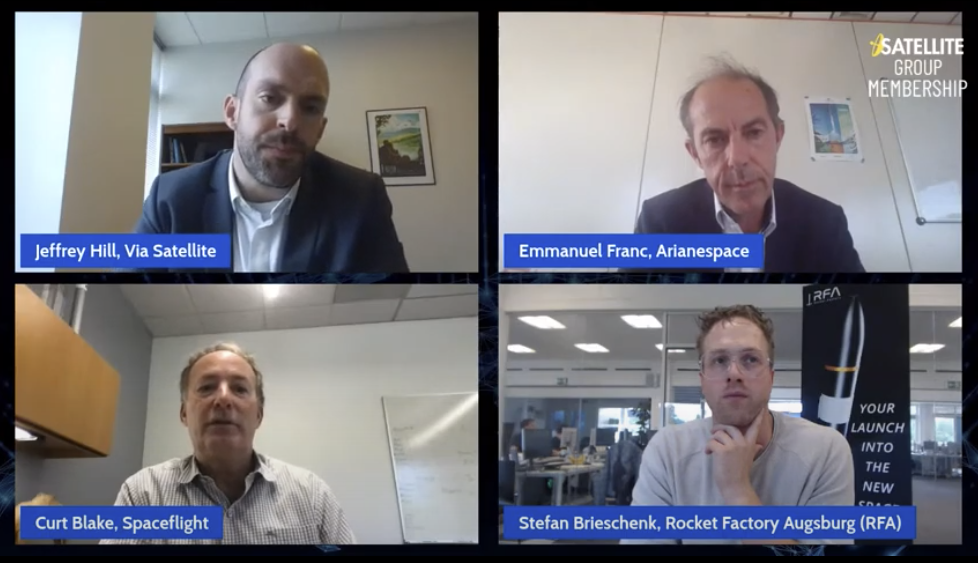 As satellites become more diverse in size and mission requirements, the launch industry is evolving to tailor custom solutions between dedicated missions, rideshare, and new launch vehicles in development.

Rocket Factory Augsburg (RFA), a German launch startup, is working to fill in what the company sees as a hole in the market. COO Stefan Brieschenk said on a Via Satellite launch webcast Tuesday morning that the future launch market will not revolve around launching hundreds and hundreds of satellites on a large launch vehicle, but flexible individual launches solutions to meet customers’ needs.

“We believe that if the price point is right, customers will choose the flexible individual launch solution. The only reason why we don’t have that yet is because no one is offering a very flexible solution at an adequate price,” Brieschenk said. “The big disruption will come when someone can create a smaller, flexible solution and provide that for the same cost as the big launch vehicles with a rideshare mission.”

RFA is in the midst of an engine qualification campaign for the RFA ONE rocket, designed to deliver up to 1,350 kilograms to a Low Polar Earth Orbit. The company recently won a $12 million prize in a German microlauncher competition.

Brieschenk described the RFA One rocket as the ideal launch solution, between a SpaceX Falcon 9 rideshare and a targeted Rocket Lab Electron.

“The ideal customer [for RFA] is someone that needs to launch a satellite as soon as possible. Someone that doesn’t have the flexibility of going into the orbit of one of these big rideshare missions,” he said.

Spaceflight’s speciality is organizing rideshare missions and has taken more than 400 spacecraft to orbit on more than 50 missions. The company organized the SO-A SmallSat Express, in December 2018 aboard a SpaceX Falcon 9 with 64 spacecraft from 34 different organizations.

CEO Curt Blake didn’t disagree with Brieschenk’s assessment of the challenges of large rideshare campaigns and said the logistics can be “daunting.” Blake said Spaceflight has added a focus on rideshares on smaller launch vehicles in the 1,000-kilogram class.

“If you’re doing 1,000 kilograms, you’re doing rideshare because on a small satellite level, [it has] five to 10 customers at a minimum,” Blake said. “That means you’re tackling a pretty diverse bunch of customers and you have to figure out how to package those up and put those in a vehicle. I think that rideshare still plays a significant role.”

Spaceflight recently debuted its line of Sherpa orbital transfer vehicles (OTVs), providing “last-mile” transportation in orbit, giving customers more flexibility. The company is preparing for its GEO Pathfinder mission, which will perform a lunar flyby to deliver a payload for GeoJump.

This brings its own challenges. These sizes can be difficult to manifest, Blake said. “Some of these volumes can be long, flat, and floppy. We’re veering away from the Cubist sort of architecture that predominated for quite a while, and that can be a bit of a challenge.”

Arianespace, which is known for lifting large, Geostationary (GEO) satellites to orbit, has also had to adapt to the changing market. Arianespace Chief Commercial Officer Emmanuel Franc said the upcoming Ariane 6 rocket is “perfectly fit” for evolving demand. Arianespace plans to offer rideshare on both the Ariane 62 and Ariane 64 for small satellites leveraging spare capacity of primary missions.

The highly anticipated Ariane 6 rocket is set for a debut flight by the end of this year, Franc confirmed.

Franc said that the launcher has gotten increased interest from customers who were planning to fly with Russia but no longer want to fly with the country.

“We have been approached by several of our customers in Asia, for example, who were coming to us since canceling their contract with the Russian launcher and discussing an alternative solution to launch on Vega or Ariane. Nothing is finalized because we have a manifest. But there are some active discussions with several customers,” Franc said.

This programming was part of the SATELLITE Launchers Forum, available exclusively to SATELLITE group members. On June 8, SATELLITE will host the panel: Expanding the Global Spaceport System: New and Emerging Launch Centers. Learn more about digital forums and the membership.