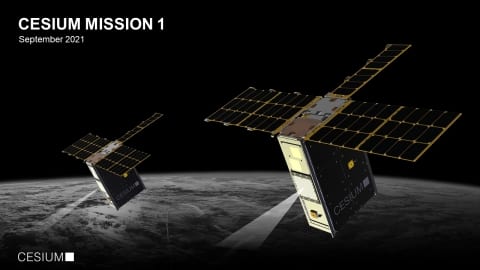 A rendering of the two cubesats in CesiumAstro’s Mission-1. Photo: CesiumAstro

CesiumAstro has announced plans for its first launch, Cesium Mission-1, consisting of two cubesats, in September of this year. CesiumAstro builds phased array communication payloads for airborne and in-orbit platforms.

The company said in a May 25 announcement that this first launch will serve as an on-orbit testbed for customers to run experiments on its electronically steerable, multibeam Active Phased Array (APA) technology. The two satellites will have an inter-satellite link, and will allow CesiumAstro to demonstrate dynamic waveform switching and dynamic link optimization

The mission has been coordinated with the Defense Innovation Unit (DIU), and is set to launch on a ULA Atlas V-401 rocket as a rideshare with NASA’s Landsat-9 mission.

“Through this new mission, CesiumAstro’s customers will directly benefit from the rich range of opportunities APA communication and sensing systems with a fully software-defined digital backend can provide,” Founder and CEO Shey Sabripour commented.