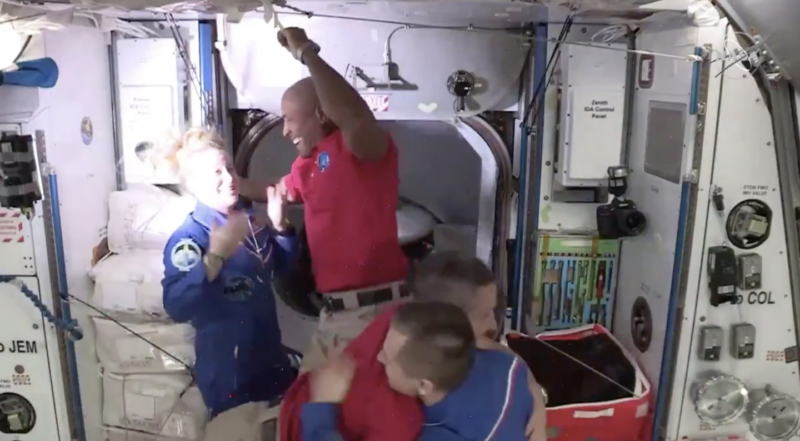 Commercial Crew members in red, Victor Glover (back) and Michael Hopkins (front) celebrate their entry to the ISS on Nov. 17. Screenshot via NASA.

The docking took place at 11:01 p.m. ET on Monday, Nov. 17, transporting NASA astronauts Michael Hopkins, Victor Glover, Shannon Walker, and JAXA astronaut Soichi Noguchi. The astronauts will now stay on the ISS for a six-month science mission. Glover is the first Black astronaut to spend a six-month period on the ISS.

“SpaceX and NASA, congratulations. This is a new era of operational flights to the International Space Station from the Florida coast,” mission commander Hopkins said upon successful docking.

This is the Crew-1 mission, the first of six crewed missions that SpaceX will fly for NASA’s Commercial Crew Program, following the successful demonstration mission in May. SpaceX made history in May as the first privately owned company ever to launch human beings into space, marking the first time in nearly a decade that U.S. astronauts launched from U.S. soil.

The astronauts had a more than 27-hour journey to the ISS after lifting off on a Falcon 9 rocket on Sunday, Nov. 15, from Launch Complex 39A at NASA’s Kennedy Space Center in Florida.

The astronauts join three others on the ISS, and the long-duration crew of seven is the largest in ISS history. The station has hosted up to 13 people before but only for a short time.