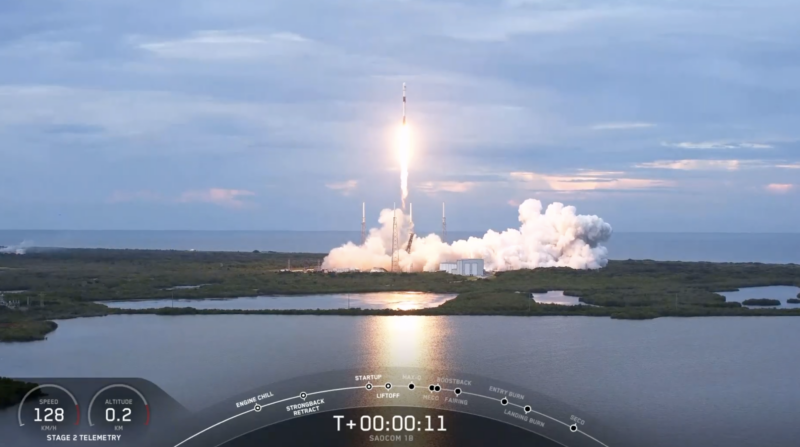 SpaceX SAOCOM 1B launch on Aug. 30. Photo: Screenshot via SpaceX

SAOCOM 1B was placed into a Low-Earth, Sun-Synchronous Orbit and deployed 14 minutes after liftoff. It was the second SAOCOM satellite — SpaceX launched SAOCOM 1A in October 2018. The mission’s main purpose is to gather soil moisture information. This launch also carried two rideshare payloads, Tyvak’s Tyvak-0172 and PlanetiQ’s GNOMES-1, which both deployed about an hour after liftoff.

This mission marked the milestone of SpaceX’s first launch to polar orbit from the East Coast, and the first polar launch from Cape Canaveral since the late 1960s. The first stage booster landed at Landing Zone-1 (LZ-1) at Cape Canaveral, marking the fourth use of this particular booster.

“You could not ask for a better landing than that,” said Michael Andrews, a SpaceX supply chain supervisor during the launch livestream.

The SAOCOM 1B launch was originally scheduled for spring but delayed due to COVID-19. SpaceX was targeting back-to-back Falcon 9 launches on Sunday with SAOCOM 1B and a Starlink launch originally set for Sunday morning. SpaceX stood down from the Starlink launch due to inclement weather during pre-flight operations.