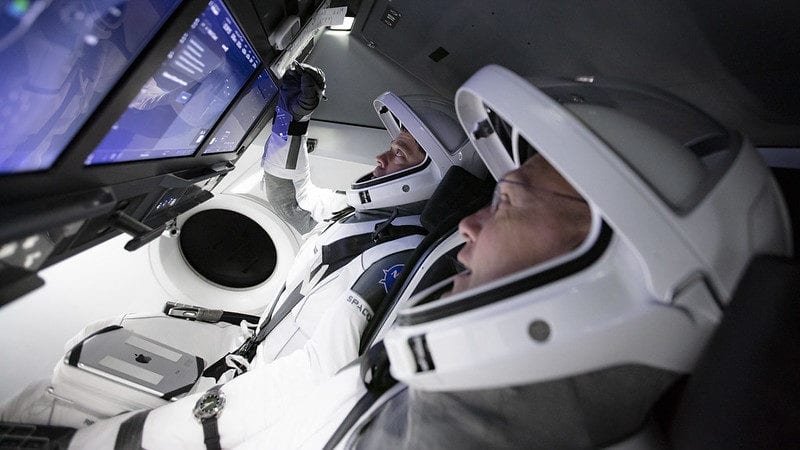 Gwynne Shotwell’s heart is in her throat.

With one gesture, SpaceX’s President and COO Gwynne Shotwell gave a glimpse into her perspective ahead of the historic NASA and SpaceX Demo-2 test mission coming up on May 27, in which a SpaceX Crew Dragon spacecraft will launch on a Falcon 9 rocket and travel to the International Space Station (ISS) carrying NASA astronauts Robert Behnken and Douglas Hurley.

The May 27 mission will be the first launch of American astronauts aboard an American spacecraft from American soil since the conclusion of the space shuttle era in 2011. It is an end-to-end test mission to demonstrate systems on orbit, docking at the ISS, and descent with crew on board. This is the final flight test for the system to be certified for regular crew flights to the station as part of NASA’s Commercial Crew Program.

SpaceX received its first NASA Commercial Crew contract in 2011. Shotwell said the SpaceX team has kept the astronauts at the forefront of their minds during this entire process.

“I wanted to make sure everyone at SpaceX understood and knew Bob and Doug as astronauts, as test pilots, badasses — but dads and husbands. I wanted to bring some humanity to this deeply technical effort as well. I’m really excited to fly them here in a few weeks,” she said.

While NASA and Shotwell previewed the mission on Friday morning, SpaceX Founder and Chief Engineer Elon Musk went on Twitter to launch an erratic tweet storm. Musk, who has been openly critical of social distancing in response to the COVID-19 pandemic, called for returning people their freedom, said Tesla‘s stock price is too high, and that he is selling nearly all of his physical possessions. He also said his girlfriend, the musician Grimes, was mad at him, quoted the poet Dylan Thomas, and tweeted the lyrics to the “Star Spangled Banner.” Tesla shares dropped after the tweets.

When the rocket takes off on May 27, it will be against the backdrop of the pandemic. NASA Administrator Jim Bridenstine stressed having our own access to the ISS is a critical capability, as well as having maximum crew on the station, and that remains the same despite the pandemic.

One notable difference is that Americans are being asked to watch the historic launch at home instead of visiting the Kennedy Space Center, which in the past has opened its gates to welcome visitors to watch Space Shuttle launches.

“We’re asking people not to travel to the Kennedy Center, and that makes me sad to even say it,” Breidenstein said. “Boy I wish we could make this into something really spectacular. But where we are at right now, we need to get Commercial Crew launched, we need Demo-2 to be successful, and the best way we can do that is to do it while keeping everybody safe. … We need a spectacular moment that all of America can see, and all of the world can see. To inspire — not just those of us who have been waiting years for this — but to inspire the generations coming. And we need to do it in a way that’s responsible.”

But Bridenstine said NASA is still negotiating a price to utilize the next Russian Soyuz launch to the ISS in October. The agency will evaluate after Demo-2 if another Soyuz ride will need to be purchased for Spring 2021. Bridenstine said he sees a future where the U.S. and Russia will trade to launch on each other’s vehicles to reach the ISS.

The Administrator cast this upcoming mission as the start of a new era in human spaceflight.

“NASA has long had this idea that we need to purchase, own and operate hardware to get to space — and in the past — that has been true,” Bridenstine said. “Now in this new era, NASA, especially in Low-Earth Orbit, Nasa has an ability to be a customer, one customer of many customers in a robust commercial marketplace in Low-Earth Orbit. But we also want to have numerous providers that are competing against each other on cost and innovation. And that’s really what we are entering into in this new era of human spaceflight.”