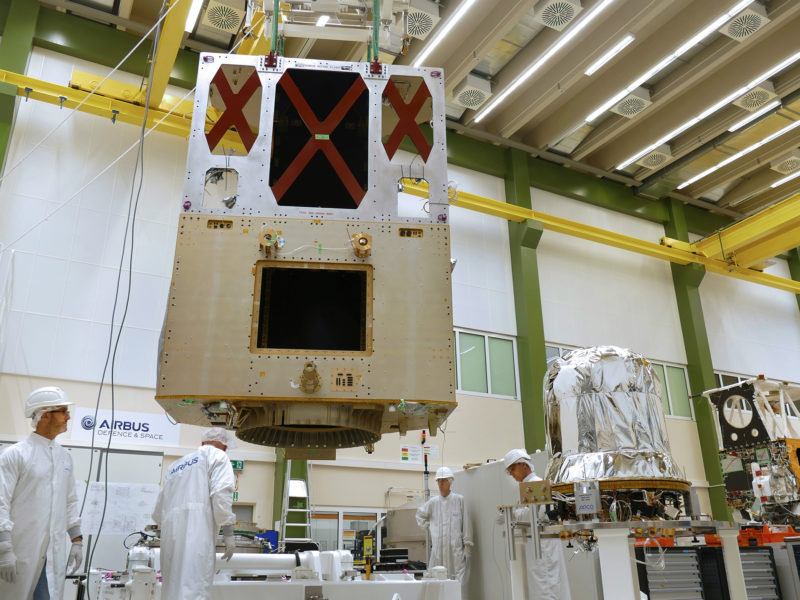 The integration of Sentinel-6A, the first of two satellites to continue measuring sea levels from 2020, has reached a new milestone and its critical phase: the propulsion module has been mated with the main structure of the satellite at Airbus.

In a complex operation, the Airbus satellite specialists hoisted the approximately five meter high satellite platform over the drive module, which had already been positioned. The two components were then fixed in place and assembled. Before this could happen, the propulsion module, which includes the engines, control devices and a 240 liter tank with a fuel management system, had to undergo technical acceptance, since this subsystem can no longer be accessed once it has been integrated. The propulsion module now needs to be hooked-up, which will then be followed by the system tests.

Two Sentinel-6 satellites for the European Copernicus Program for environment and security, headed by the European Commission and European Space Agency (ESA), are currently being developed under Airbus, each weighing roughly 1.5 tons. From November 2020, Sentinel-6A will be the first to continue collecting satellite-based measurements of the oceans’ surfaces, a task that began in 1992. Sentinel-6B is then expected to follow in 2025.

Sentinel-6 is a mission to carry out high-precision measurements of ocean surface topography. The satellite will measure its distance to the ocean surface with an accuracy of a few centimeters and, over a mission lasting up to seven years, use this data to map it, repeating the cycle every 10 days. It will document changes in sea-surface height, record and analyze variations in sea levels and observe ocean currents. Exact observations of changes in sea-surface height provide insights into global sea levels, the speed and direction of ocean currents, and ocean heat storage. The measurements made are vital for modeling the oceans and predicting rises in sea levels.