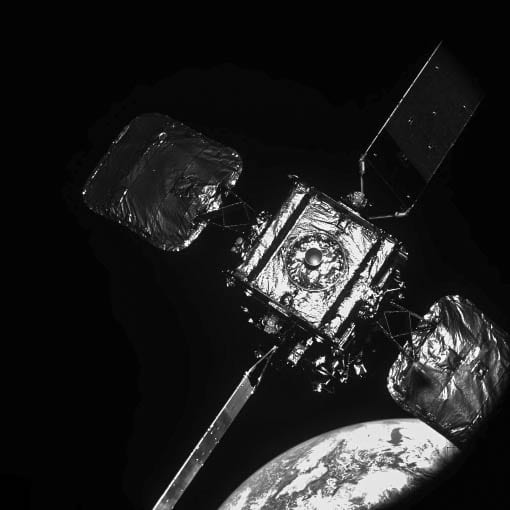 An image of the IS-10-02 satellite taken by the MEV-2 vehicle as it was approaching for docking in April 2021. Photo: Northrop Grumman

“It is a means for optimizing capital expenditure. There could be situations where you want to take a closer look at how your markets evolve, and you have a means to achieve that,” Olsen said. “There could be a technology inflection point where there is a particularly rapid development. Imagine there are promising concepts on the drawing board, but they are not yet mature, so it can also be relevant to buy yourself time to see how technology evolves.”

Some may argue that satellite technology needs to be refreshed, and extending the life of technology in orbit that is two decades old is not valuable. Olsen said these concerns have some merit, but it’s part of the trade-off that satellite operators have to make.

“There will always be circumstances where it will be valuable to remove fuel as a life-limiting factor. [With] broadcasting and video distribution, the technology shift [for new satellites] is not as pronounced,” he said. “At the end of the day, it is a commercial decision on a case by case basis. What is the cost? What is the benefit? What is the risk? We have just had the experience with Thor 10-02 and we are certainly very happy in this case and these specific circumstances.”

NGC recently won Via Satellite’s Satellite Technology of the Year (STOTY) for this in-orbit satellite servicing technology. Olsen calls this achievement a “gamechanger” in its ability to help satellite operators with lifecycle management by removing fuel as a life-limiting factor for otherwise healthy satellites.

He points to how this technology may evolve. “With this fundamental demonstration of the technology and thereafter working on the in-orbit availability, there will be a healthy case in the industry going forward for an in-orbit satellite servicing,” Olsen said. “Another thing that would help is when this technology is available on-demand. So, if you can take away the launch risk, and the build risk, and you know that there are extension vehicles in-orbit that you can get with a reasonable schedule assurance, that will be a game changer as well.

However, while the technology has worked well here, Telenor may not need in-orbit servicing technology again until later into the 2020s due to the current nature of its satellite fleet. Olsen said Telenor’s Thor 5, Thor 6, and Thor 7, have enough fuel onboard to comfortably make it through most of the 2020s.

“We are in a good situation on our own fuel. We will take time and see if [future in-orbit servicing missions] make sense,” he said. “I think the case for broadcasting satellites can be pretty compelling. Bent pipe broadcasting technology is here to stay and will be relevant in the future. Broadcasting is key to what we do, so it could make sense.”

Another question surrounding in-orbit satellite servicing, is where it sits in a satellite market that is invariably moving toward Low-Earth Orbit (LEO) and smaller satellites. Olsen believes GEO have a firm hold in the market, but that in-orbit servicing can also have an impact in LEO.

“It is not going to LEO or GEO. It is going to be both. With that in mind, we are certain that GEO satellites will have a key role to play in the future, and with GEO satellites more relevant than ever. The MEV technology that has been demonstrated will therefore also be relevant,” he said. “On this point of GEO versus LEO, the LEOs have a traffic congestion situation, that is one of the challenges for this type of technology. I think the concept of docking in a safe manner will be needed quite badly in the LEO domain in the future.”