Gary Shapiro Calls 5G “Battleground” Between US and China 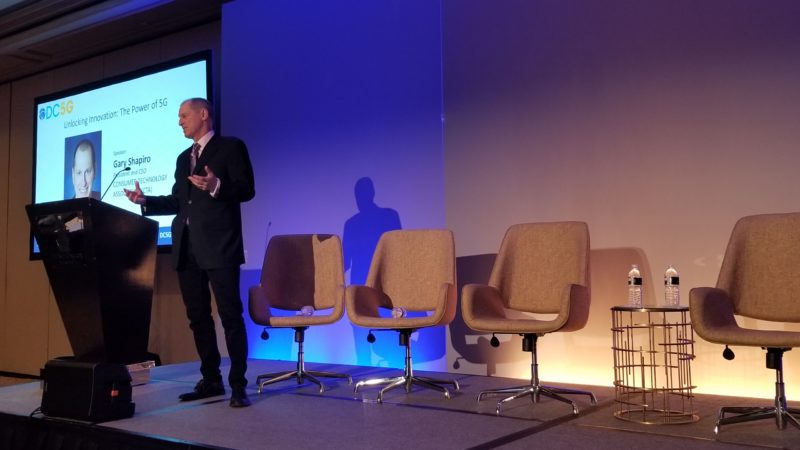 The collection of new cellular and networking technologies and standards known as 5G is the latest battleground between the United States and China on the world stage, and at stake is nothing less than global economic leadership and cultural domination, the head of the Consumer Technology Association (CTA) said Tuesday.

“There is a competitive economic battle going on … Our children’s standard of living, their way of life, will depend on how well we do as a nation with these technologies,” Gary Shapiro, president and CEO of CTA told the DC5G conference just outside of Washington, DC. “If we lose, we lose, potentially, those other battles about who we are as a nation and our focus on individual liberty.”

“It’s not just about a cool technology, it’s a matter of our national future … If China wins, their way of life will become the way of life that’s pushed on the world,” Shapiro said.

He highlighted China‘s use of pervasive data collection to create its infamous “social rating system,” based on information about individuals including how quickly they pay their bills, what they post on social media and who they associate with. The rating is used to determine everything from what interest rate you might pay on a loan, to how easily you can book airline tickets, to “even your position on dating websites.”

“In China there isn’t a lot of privacy,” he concluded.

Shapiro noted that in some kinds of technology, “We see a tradeoff between privacy and data availability.” The huge amounts of data needed to train Artificial Intelligence (AI), for instance, were much more easily available in China, owing both to the absence of privacy protections and the greater size of the population. “China has more than double the population of the U.S. and Europe (combined) and a single language,” he noted, which gives them a big head start.

On the other hand, Shapiro emphasized the importance of the rule of law and a respect for human liberty in fueling technological progress. “We believe if you want to be innovative (as a nation), you have to protect individual rights,” he said of CTA.

The character of the United States as a nation also drove its innovation culture and its leadership potential in technologies like 5G, he argued. “We are a country of immigrants,” he said, “that means we are descended from people who wanted something better” for themselves and their children.

Shapiro said U.S. government leaders needed to be more outspoken in highlighting the stakes in the 5G contest, especially “political leaders in congress and the man at the top of the White House … President Trump.”

“The next step we’re missing is for government and political leaders to stand up and say ‘5G is vital to the future of the United States” — not just as a technology in itself, but because it will deliver huge economic benefits and drive innovation “to help solve fundamental human problems.”

“The bully pulpit does drive behavior,” he added, noting that it might encourage communities to rethink regulations that placed aesthetic or other restrictions on the erection of the millions of new mini cell towers 5G networks would require around the country.

He compared the development of 5G to the rollout two decades ago of the U.S. standard for High Definition TV. “We had a visionary leader, we had a goal and we acted on it in partnership between industry and government.”

There were those who doubted the value of HDTV technology, he said, just as there are today those who question the value of 5G. “I’ve heard, ‘Who needs 5G? … The benefits are overstated.’”

But there have always been naysayers, he said, “People were saying the same thing about 4G, about 3G.” When cellular telephone technology was first introduced, some questioned the value of that, he recalled. “People even said, ‘Who needs a cell phone?’ and the early estimates of [user adoption] were totally understated.”

His remarks come as U.S. agencies continue to craft regulations designed to exclude hardware from Huawei and other Chinese suppliers from the core of U.S. 5G networks — the ultra-fast upgrade to cellular telephone technologies that will help connect billions of devices in the coming decade. Officials say they are concerned that Chinese-made hardware might have concealed backdoors built in that would allow cyberattackers to infiltrate the new networks and steal, manipulate or destroy data.

“I trust our government,” Shapiro said, noting that he does not have a security clearance to see classified intelligence, but talks to many officials — both in the U.S. and in allied nations — who do. “I am convinced that they are convinced” the danger from Huawei equipment is real, he said.

“Will it slow us down?” he asked of the ban, “Maybe.” Alternative suppliers may take time to find and the cost advantage U.S. companies will give up by eschewing cheaper Chinese hardware might elongate their investment cycle. “It wasn’t an easy decision to make,” he added, but “It’s worth it to preserve our privacy … It will be better in the long run.”