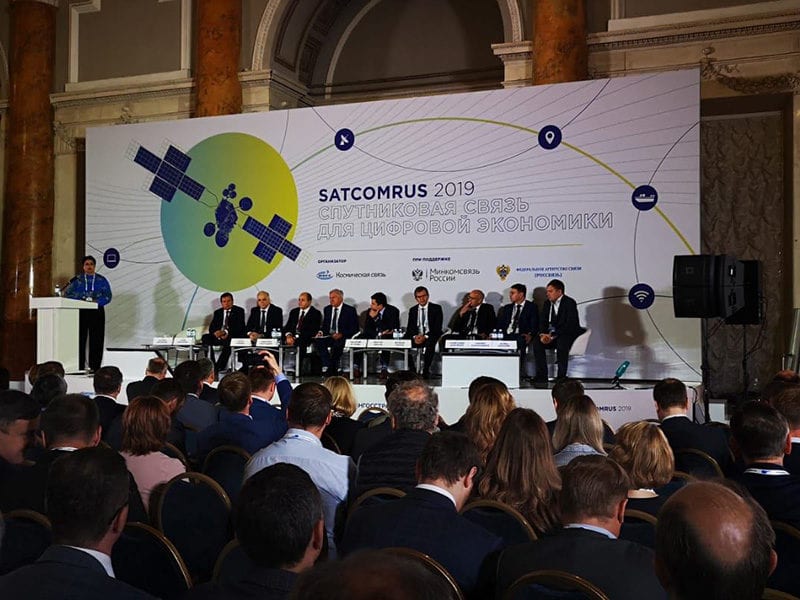 The opening general session at SatComRus 2019. Photo: Via Satellite/Mark Holmes

Moving into a digital economy with satellite at the forefront was one of the key themes to come out of SatComRus 2019, which was held in Saint Petersburg. One of the morning speakers was Igor Chursin, deputy head of Russia’s federal communications agency, who gave the Russian government perspective on the changing environment for satellite communications in Russia. Chursin said Russia stood at the threshold of digital convergence and a digital economy. He called it a “top priority” for the government and said the development of satellite communications in IT infrastructure was seen as “very important.”

He set out plans to improve satellite communications throughout Russia. “We have developed the business plan for highly elliptical satellites. So, in the next year, we will start producing and building satellites for highly elliptical orbits to be launched in 2023. We will not achieve high throughput in places such as the Arctic Circle without these kinds of satellites. In five years, the sunrise will start in the Antarctic (new services via satellite). We see high quality communication needs to be provided. We are seeing the growth of high-tech communications. Old technologies are gradually leaving the scene.”

Chursin added that over the next four years, connection to moving objects and broadband access will see a lot of growth. “We are on the verge of a technological revolution as we move all the way to 5G. We have things like Artificial Intelligence (AI) and Virtual Reality (VR). I am sure satellite communications will find an important place in the future.”

However ,while this was positive, Chursin also struck a cautionary note adding that the government was not seeing enough breakthroughs in terms of costs of user equipment. “The satellite communications industry will be on the rise over the next seven years. We believe the market will change dramatically. Operators such as RSCC and Gazprom are in the front line of advances in the industry. 5G is making inroads into the system with lots of debates surrounding it, particularly with the allocation of frequencies.”

One of the other main speakers was Yuri Prokhorov, director general of RSCC. Significantly, RSCC now generates over half of its revenues from international market, rather than the domestic market, which is a major change. The company, which provides more than 60 percent of TV broadcasting in Russia, has been aggressively growing its international base. The company’s highly elliptical satellite plans will be funded by the government. “We have an opportunity to provide good communications to any moving object,” he said.

However, while the operator has plans to develop highly elliptical orbits, Geostationary Orbit (GEO) will remain fundamental to its business plans with Prokhorov admitting that RSCC plans to commission 12 new spacecraft over the next 10 years in GEO. In terms of the 5G opportunity for RSCC, Prokhorov added, “5G will be the standard for Internet of Things (IoT). For satellite communications, the creation of new standards is important around 5G. The possibility of providing broadband access and delivery of media content are great products (for us).”

Given that a lot of SatComRus was tackling the question of Russia’s satellite future, some were predicting that the move to small satellites many not happen as quickly as some think. Nikolay Testoedov, Director General, ISS Reshetnev Company wasn’t so sure that small satellites would be the next big thing. He said, “GEO satellites are in a difficult situation. However, in terms of satellites being provided faster and cheaper, there is no miracle. If you try to create a cheaper Ferrari, it will ultimately become more expensive than creating a normal Ferrari. Of course, all manufacturers want to have reconfigurable satellites,” he said.

Vincent Guermonprez, telecom sales director of Russia and North America, Airbus Defense and Space, spoke of the trends from a manufacturing point of view. He added, “Digitalization is not only for the product but for the industrial process. I don’t know if it will be a Ferrari, but we will offer cheap, quick products to get to market. We have presented these new products to RSCC. We hope what we are thinking will be useful for a lot of operators tomorrow.”

With 5G on the horizon, speakers tackled the future video market in Russia. Nikolay Orlov, Tricolor, one of Russia’s main pay-TV providers, admitted that that the modern world of communications and media consumption is changing before our eyes. He added, “A decision was arrived that an ecosystem should be put in place, and the user should be able to receive as many possible services from us. We are losing ground to terrestrial operators because we cannot provide access to the internet. Our ecosystem will definitely develop (as we look to cater to different customer needs).”