SpaceKnow CEO: Why Economists Should Look to the Skies

In a world where the global economy is both volatile and wildly unpredictable, financial analysts are constantly looking for new ways to keep track of its evolution. Now, with the costs to access orbit dropping by the day alongside the proliferation of Big Data, more economists are looking to satellites to gain insights about our world.

Silicon Valley-based startup SpaceKnow hopes to stand at the forefront of the emerging satellite imaging analytics industry — the key word there being “analytics,” said SpaceKnow Chief Executive Officer Pavel Machalek. Although SpaceKnow is a relatively young company — founded in 2013 — it has already started to make waves both in the satellite industry and on Wall Street, particularly in the defense and construction markets.

SpaceKnow’s flagship product, and one of the most powerful examples of the capabilities of satellite imagery analytics, is its China Satellite Manufacturing Index (SMI), which went live on Bloomberg Terminals last year. The index tracks 6,000 industrial areas in China, analyzing images of buildings, roads, construction and more to assign values for changes over time. This allows SpaceKnow to get a snapshot of how the country’s economy is faring, said Machalek — one that is separate from the notoriously inaccurate readings released by the Chinese government.

“We use the historical record we have to make a comparison of the data,” Machalek said. “We go back 10 or 15 years and look for specific telltale signs of activity.” The revolutionary part of this, he said, is that all of the analysis is now automatic, thanks to recent advances in machine learning. “We have our own proprietary technology that coalesces the imagery from a number of providers in real time. Using algorithms that we build ourselves, [we] bring all these disparate data sources together as if they were one and analyze the economy and how it’s performing on a month-to-month or week-to-week basis.”

Economic analysts from all corners of Wall Street — from Exchange-Traded Funds (ETFs), to private equity, to publicly traded companies — have begun to turn their heads in response. Kate Moore, chief equity strategist at BlackRock Investment Institute, noted that satellite imagery is becoming one of the dominant sources of alternative data. “Investors need not depend solely on China’s government data when making investment decisions,” she wrote in BlackRock’s February 2017 global equity outlook report. “Big Data culled from satellite imagery … may give investors an edge.”

“Satellite data available from vendors can identify sectors of China’s economy that are experiencing the highest level of growth. Images taken from space, for example, can monitor the amount of materials going into a construction site and help determine whether a project is being completed on time,” Moore wrote.

SpaceKnow is not the only company exploring the potential of satellite imagery analytics. Orbital Insight, for example, analyzes high-resolution satellite images from providers such as Airbus to measure global oil supply. By tracking Chinese oil tanks’ changing shadows, the company’s algorithms are able to estimate the total oil storage across the country. 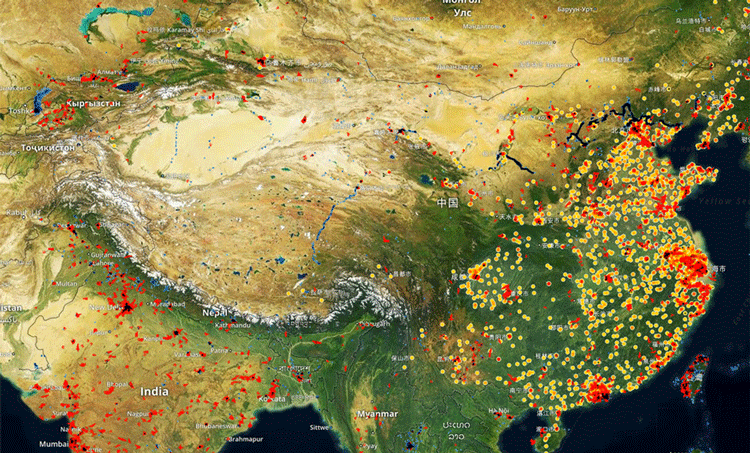 However, Machalek states that what sets SpaceKnow apart is its access to a wider sum of data thanks to partnerships with companies such as DigitalGlobe. The company’s cloud-based platform Geospatial Big Data (GBDX) can capture imagery at a resolution of 30 cm with Worldview-3, allowing SpaceKnow’s algorithms to calculate within a degree of accuracy that was previously unachievable. That gulf between an estimate and an accurate reading could make all the difference when it comes to betting on the global economy.

Investors in the satellite industry are already making big bets of their own: SpaceKnow recently announced it raised $4 million in Series A financing led by BlueYard Capital. SpaceKnow plans to use those funds to “grow marketing in the U.S., European and Asia-Pacific regions, as well as expanding research and development operations in both the U.S. and Europe,” Machalek said. Given that the geospatial imagery analytics market is estimated to grow from $2.77 billion in 2016 to $10.21 billion by 2021, according to an October 2016 report by Markets and Markets, Machaleck expects SpaceKnow to “comfortably grow revenue over the next months and years.”

The use of Big Data has become commonplace in many industries today and there are already hundreds of Earth Observation (EO) satellites snapping pictures of the surface on a daily basis. Their evolving proficiency unlocks a unique challenge for analytics companies, Machalek said, which is turning all of that information into an actionable asset.

“The biggest question is, if you can observe the whole world every day, what would you look at?” Machalek queried. “You can track ports and mines and factories. You can track ships, cars and trucks. The trick is … really reducing the complexity of the world into something that’s useful.”