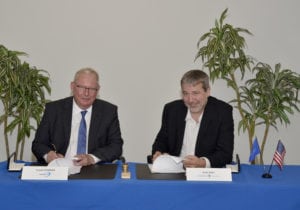 [Via Satellite 07-08-2016] In ramping up to build 900 small satellites, OneWeb Satellites last month revealed its first three subcontractors that will help build the company’s mega-constellation for low cost space-based telecommunications. MacDonald Dettwiler and Associates (MDA) of Canada, Sodern of France, and Teledyne Defence in the United Kingdom are all publicly announced partners in the mega-constellation project that OneWeb Satellites, the joint venture between OneWeb and Airbus Defence and Space tasked with manufacturing the satellites, is leading.

Together these companies are preparing for high volume manufacturing to get the first of 648 operational satellites in orbit starting in 2018. Via Satellite talked to leaders in this project about how they plan to achieve this heretofore-unseen production scale.

The 900 OneWeb spacecraft require 3,600 communication antenna subsystems, which MDA is producing. Joanna Boshouwers, VP and general manager of MDA Satellite Systems, told Via Satellite that the company’s first step is developing designs that are easily producible in terms of manufacturing, Assembly, Integration and Test (AIT). She said early breadboards have already been produced to retire the technical risks and that the ongoing “productization” phase will be critical in achieving the expected delivery rates and budgets.

“The antennas produced by MDA for OneWeb will be based on previous antennas solutions and components, including those developed for constellations programs, but with refinements that are focused primarily on mass and cost reductions,” she said. “For example, the gateway antenna design uses a patented concept that is capable of constantly steering the high gain Tx and Rx beam over a field of view wider than +/-60 degrees without any rotary joints and no tracking singularity within the coverage. This concept enables the use of simpler rotary actuators and simplified feed chains.”

Boshouwers pointed to previous MDA projects where the company supplied antennas to terrestrial systems for radar and electronic intelligence applications as providing good experience for working with OneWeb Satellites. She said some products were produced in quantities of several hundred and have been instrumental in shaping MDA’s “design-to-cost” mindset and volume production capabilities. At the other end of the spectrum, she highlighted the company’s work with the robotic arms of the International Space Station (ISS) as having honed mechanisms expertise. This enabled MDA to qualify low cost actuators for high reliability and high duty cycle applications, she said.

Boshouwers mentioned 3-D printing as valuable for minimizing the number of parts needed for antennas during the design phase. She also praised collaborative robots and other related technologies that minimize touch labor as means to boost assembly line efficiency.

“The assembly lines are being designed with great care and they will include robotics systems in order to streamline some of the assembly work. Our previous experience with constellation programs has clearly demonstrated that a dollar of careful planning can be recovered manifold during the production phase,” she said.

To mass produce 1,800 star trackers for the 900 small satellites, Sodern, in collaboration with partners 3D Plus and Adveotec, is creating a new product line called Auriga. The company aims make star trackers — used to orient the satellite — with a factor of 10 less weight and volume, along with a price divided by a factor of 50 to 100 compared to traditional star trackers. Sodern CEO Franck Poirrier told Via Satellite that the company originally had the idea for Auriga a couple of years ago upon noticing the momentum of “NewSpace” in Silicon Valley.

“We did not want to miss out on these opportunities as we also realized it was a game changer for the industry at large, from the inception of new business models to a major challenge to the overall supply chain of the space sector, begging for novel approaches to meet the cost targets and the production capacity requirements,” he said.

OneWeb Satellites contacted Sodern about producing star trackers, which led to a

co-engineering phase to target the best performance versus cost trade-offs. After getting selected, Sodern also ran a design-to-cost exercise in order to identify the building blocks necessary to make an end product fulfilling the target cost and required production rate.

“[A] dedicated Auriga factory is designed around a one piece AIT flow, which is free of critical process in such a way that each operator can manage the end to end AIT,” Poirrier explained. “A ‘hospital line’ is set on the side to treat the anomalies without perturbing the normal flow. This puts a premium on the overall supply chain with a clear focus on responsibilities sharing, relationship efficiency and swift decision-making.”

Sodern has experience with small satellites, having recently finished building two cameras derived from the architecture of its Hydra star tracker for the French space agency CNES’ Myriade microsatellite platform in the frame of the Taranis mission. Poirrier said Sodern has already secured the full ecosystem necessary to manufacture Auriga star trackers and ship at peak production rate with built in margin. He mentioned use of Commercial Off The Shelf (COTS) products, 3-D printing and greater automation as methods of optimizing production. Building in an environmentally conscious manner will be critical as well, he said.

“It goes without saying that green manufacturing technologies will unequivocally be part of the equation, and while I realistically cannot fathom all of them as of yet, I am convinced they will play a pivotal role in mapping out the satellite manufacturing time table,” Poirrier added.

Each of OneWeb’s satellites will use two “flexible channelizers” capable of supporting constantly changing frequencies to deliver the company’s broadband internet services. Teledyne Defence, a business unit of Teledyne Microwave Solutions, received the initial development contract for the channelizers. Teledyne declined to participate in an interview regarding the company’s manufacturing strategy for the OneWeb project. In a press release, Ian Skiggs, general manager of Teledyne Defence, said the channelizers will “require a complex converter within a significantly compressed schedule.”

Teledyne Defence has another contract option following the development stage for the production of enough channelizers for the entire constellation. The company said it will be expanding its local operation in the coming months in readiness for the production phase of the program.