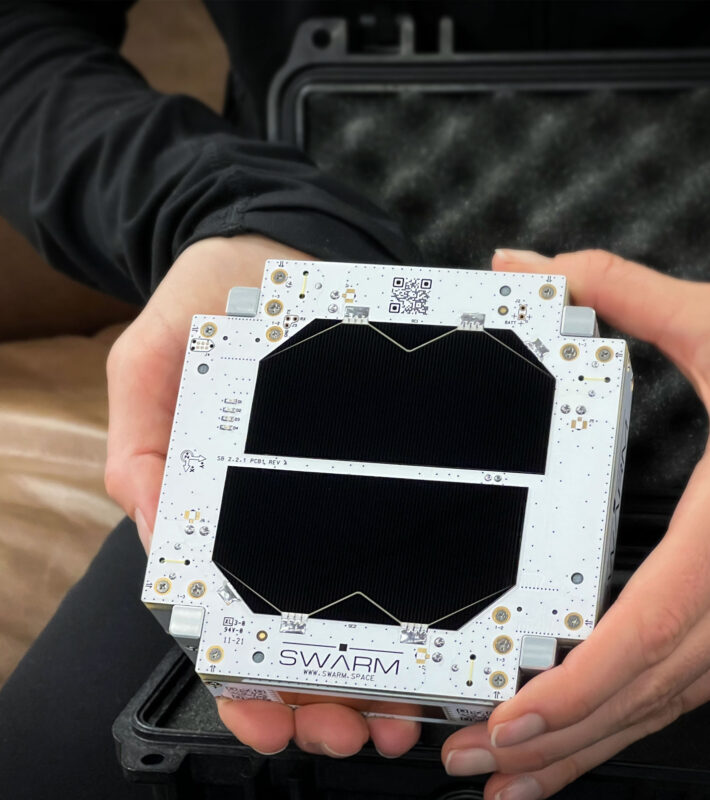 SpaceX could potentially roll out new products for Starlink and Swarm in the coming years that could capitalize on the synergies between their respective broadband and IoT businesses. Sara Spangelo, Swarm co-founder and former CEO of the company hinted at new products in a recent conversation with Via Satellite about how Swarm has functioned as a part of SpaceX since the acquisition last year.

“I think over the next few years, you’re going to see an evolution in the types of products that both Starlink and Swarm offer, and you’ll start to see some of those synergies emerge even stronger,” Spangelo said on Aug. 5.

“If you’re talking about data rates and latency and cost, Swarm and Starlink are at very opposite ends. I think it would be a natural thought to imagine that there’s kind of a coming more into the middle,” she added. “I don’t want to give anything away yet.”

Spangelo pointed to companies in agriculture, oil and gas, logistics and maritime industries, for example, that have both broadband and IoT needs. A maritime company might need broadband to connect people on boats and IoT to track vessels, for example.

She said Swarm and Starlink sales teams have already helped each other by providing introductions to enterprise customers that might be working with one solution and need the other as well.

Spangelo’s formal title is senior director of Satellite Engineering at SpaceX, and when asked, she jokes, “I’ve never really known what these titles mean.” She still leads Swarm, and those responsibilities have not changed much, except she no longer has to spend time raising money and communicating with investors. She has also taken on new responsibilities related to Starlink engineering, “new programs related to Starlink.”

“I like to try to figure out the connections between technical, business, and regulatory. Those cross sections are often quite complicated and involved,” Spangelo said. “We’re able to provide input on things that we found were successful with Swarm, maybe a regulatory strategy or marketing strategy, or go-to-market sales strategy. I am definitely not one of the people making all the calls at Starlink.”

“I am involved in some stuff at Starlink that I’m not ready to talk about yet,” she adds, hinting at future developments.

Swarm is a wholly-owned subsidiary and still operates its service under its own branding. It still has its own standalone network of satellites, ground stations, and software, and continues to manufacture its own satellites in Mountain View, California. But SpaceX has helped Swarm scale production by about 10x this year relative to last year, Spangelo said, through SpaceX machines, processes, and supply chain.

Being a part of SpaceX has helped Swarm in terms of access to launch, manufacturing, hiring, and regulatory strategy. Swarm had a network of about 100 tiny IoT satellites in orbit last year when it was acquired by SpaceX, and now has around 160, Spangelo said.

With more satellites, including satellites in polar sensing orbits, Swarm has cut latency to one hour or less for messaging on its network. “That’s a huge unlock in terms of the types of customers that we can provide services to,” Spangelo said. “When we had six hour gaps, that wasn’t quite good enough to do wildfire detection or illegal logging detection. We’ve been able to unlock more of this customer base and sell to additional folks.”

Swarm has “hundreds” of customers in the 15 countries it operates in, she said. The constellation is fully deployed and Swarm only plans to put up 24 to 36 satellites over the next year as it maintains the constellations and replaces some early satellites that are reaching the end of their lifetime.

Swarm’s sales goal for 2023 is 10 times the sales goal for 2022, Spangelo said, adding the network could likely support 100 times the customers that Swarm currently has. About 80% of the business is in agriculture and environmental monitoring, and other customers are in logistics, maritime, and heavy equipment.

“It’s just an acoustic sensor, much like what you’d have on your phone that can detect it,” Spangelo said. “They spread these out across the Brazilian rainforest and if there’s a chainsaw, they can detect it and alert. This is devastating and happens over the millions of acres all the time, and no one’s really tracking it. It’s a really cool technology and relatively simple.”

She sees increased interest in remote IoT, even among traditional companies that would not have considered it before.

“I think there was something to do with COVID, that people were a lot more comfortable with deploying devices instead of people going out,” she said, saying companies have shifted to be more comfortable with using sensors to learn what they need to know. “Companies are just getting more environmentally aware. [Such as], we need to be monitoring what we’re doing, where our trucks are, how efficient our systems are, and what’s going on in the field.”