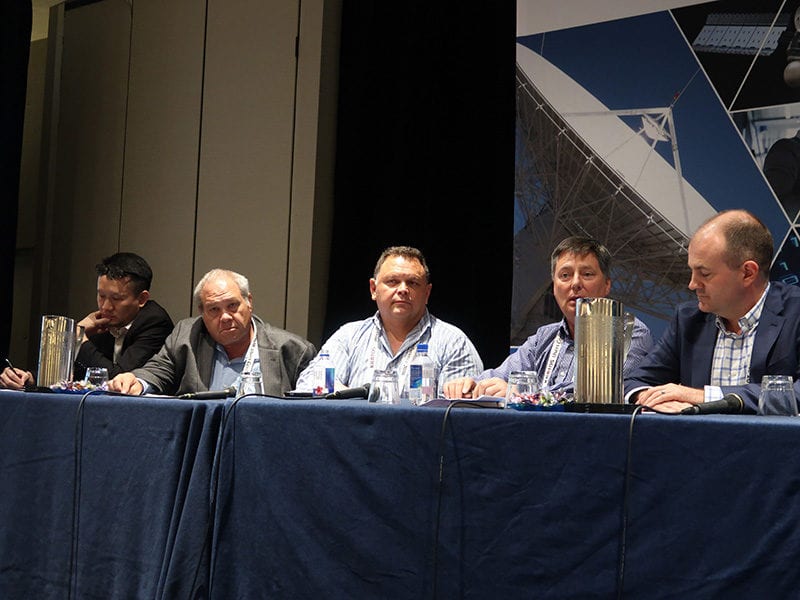 A panel at the 2018 Kratos Global Users Conference. Photo: Kratos

High Throughout Satellite (HTS) systems have brought unprecedented flexibility and bandwidth to the marketplace, but the new capability comes at a price: increased network complexity that will require innovation on the ground to manage effectively without breaking the bank.

HTS satellites, which have been deployed in increasing numbers in recent years, feature multiple spot beams that can be created, removed, or redirected at any time by commands from the ground, enabling highly efficient use and reuse of bandwidth. While this allows operators to respond quickly to shifting demand and better serve emerging markets such as mobility, it vastly complicates the job of network managers responsible for everything from satellite control and signal monitoring, to service tracking and customer billing.

Compounding the HTS challenge is the arrival of large constellations of satellites in lower orbits, which can complement traditional Geostationary Orbit (GEO) satellites, but have their own unique set of operating requirements. Some of the world’s major satellite operators are looking to more closely integrate the two types of systems in the years ahead.

At a recent user conference sponsored by Kratos, industry officials welcomed the full-scale arrival of HTS as a boon to the industry. But these officials also said that, based on experience to date, the ground has some catching up to do.

“If you’re having to manage bigger and more complex networks, what you can’t do is allow your operations costs to grow proportionally with the size of your networks,” said Stuart Daughtridge, vice president of advanced technology at Kratos. “The bottom line is you’ve got to be able to … manage more networks for less money than you had in the past.”

Operators are adapting by introducing more automation, virtualizing ground stations and shifting more functionality to cloud-based servers, according to Daughtridge and other speakers at the conference. One of the more basic challenges is allocating limited uplink resources between commands to the satellite and to its dynamic payload.

Tobias Nassif, general manager of the satellite control center Viasat, said uplink time devoted to satellite station-keeping and other maintenance is time that cannot used to reconfigure the payload in response to shifting demand. Operators thus face a tradeoff between necessary housekeeping and revenue generation, he said, suggesting that these tasks might require their own separate uplink channels.

During a panel discussion, officials representing satellite manufacturers, operators and ground system providers said a broader challenge is simply managing the sheer volume of tasks in the HTS environment.

“Automation is probably going to be one of the key elements you’re going to want to look at in a high throughput satellite,” said Tom Leisgang, technical director of ground systems mission engineering and operations at manufacturer SSL, a division of Maxar Technologies.

For SES, the introduction of HTS has led to a “huge, huge increase in scale” driven in part by increased interactions with customers, particularly those using the bandwidth for challenging applications such as aeronautical communications, said Steve Cooper, vice president of product line management and connect services at SES Networks.

SES has the added challenge of integrating a growing constellation of Medium Earth Orbit (MEO) satellites, which require steerable ground-based antennas to track and communicate with each one as it passes from horizon to horizon. “That’s a whole lot of moving parts that need to be kept in sync, so that’s one of the bigger challenges we’re seeing,” Cooper said.

To save on infrastructure costs, companies also are, to different degrees, shifting data storage and other functions to cloud-based servers like Amazon Web Services, which are reliable, secure, and attractively priced. The panelists said they anticipate using a mix of public and private cloud-based services in the future, depending on the sensitivity of the application.

Meanwhile, the dynamic HTS signal environment — with spot beams being constantly redirected — complicates the task of mitigating interference, the panelists said. Whether inadvertent or deliberate, signal interference must be identified and geo-located before it can be addressed.

Bob Potter, vice president of signals and ground systems technology at Kratos, said the interference identification and geolocation issues can be addressed in part by technologies including the capability aboard some satellites to briefly but regularly sample incoming signals for integrity. This information can then be sent to a centralized location for detailed analysis, he said.

Emerging “big data” analytics technology also will come into play as operators seek to get the most out of their HTS satellites. Nassif said operators could use big data analytics to anticipate shifts and surges in demand, and react accordingly. “The more you know, the more you’re able to understand what situation you’re in, the better you can be proactive rather than reactive,” he said.

Warren Ferster is a Washington-based consultant and writer specializing in the space and satellite industry. Previously he was with SpaceNews, where he spent 21 years, the last eight as editor in chief.