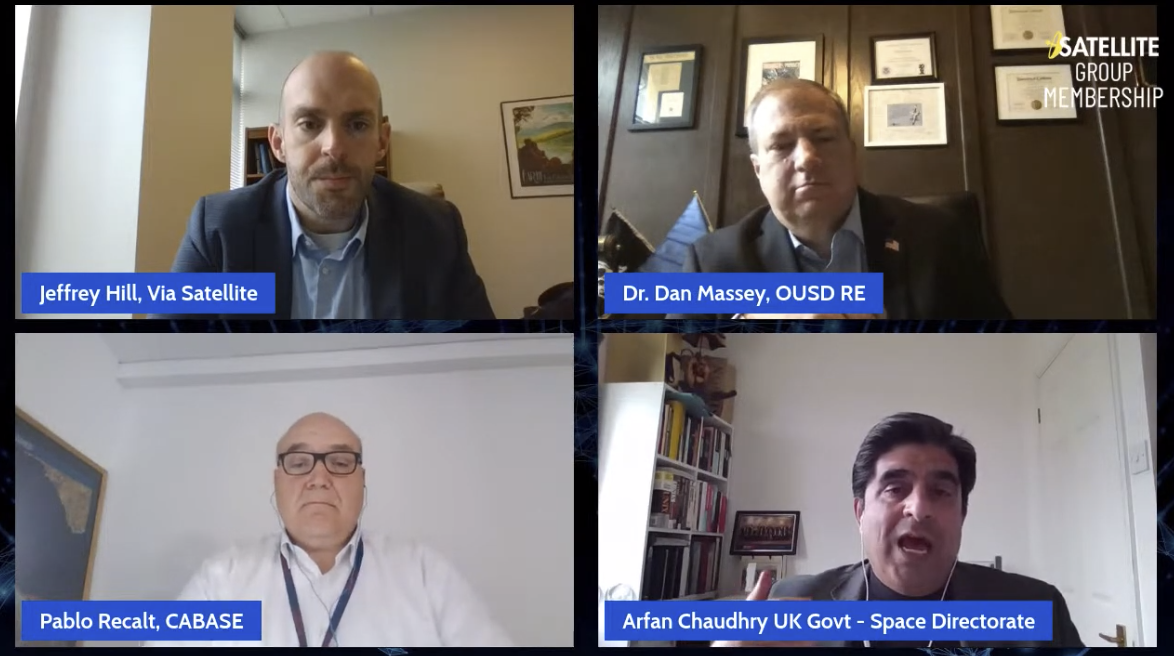 SATELLITE virtual The SATELLITE End User Forum on May 4.

Around the world, governments, militaries, and nonprofits are seeking greater collaboration with the commercial satellite industry to meet connectivity needs, civil and defense representatives said on a government end-users webcast Wednesday morning.

The U.S. Department of Defense (DOD) is looking to leverage both space and ground-based developments in 5G as part of its 5G-to-Next G Initiative (5GI), overseen by the Office of the Under Secretary of Defense for Research and Engineering.

Program Lead Daniel Massey said on the webcast that the DoD would have built its own proprietary 5G system years ago, but is now focused on the “operate through” principle to operate through advancements in commercial technology.

“We have to be aligned with commercial,” Massey said. “The U.S. Department of Defense is putting great resources into communications — 5G, tactical, satellite. Yet even our substantial investments do not compare with the overall amount of money coming in from the commercial industry across the globe. Rather than fight against the tide of the commercial industry, we want to see how we can align with and operate through that?”

Massey said the DoD wants to see a message be able to travel over a commercial or DoD 5G-compliant network, satellite, and Wi-Fi, different transports as a “combined way to communicate rather than distinct silos.” In particular, the National Security Technology Accelerator is accepting bids from industry on building a network operations center security operations center (NOC SOC) that accounts for an integrated world using multiple paths including 5G and satellite, he said.

Massey spoke alongside representatives from the United Kingdom’s Department for Business, Energy and Industrial Strategy, and Argentina’s CABASE non-profit as part of the SATELLITE End User Digital Forum on May 4.

The United Kingdom is focused on fostering an environment in which industry can engage in the increasingly commercial space landscape, said Arfan Chaudhry, head of International Strategy for the U.K.’s Department for Business, Energy and Industrial Strategy (BEIS) Space Directorate.

The nation released its first-ever National Space Strategy in September 2021 and is working to deliver on the strategy.  Chaudhry highlighted that one tenant of the strategy focuses on capturing the commercial small satellite market in Europe, and the U.K. is working to offer both vertical and horizontal launch capabilities.

“[Our focus is] on joint military and civil; recognition that space is critical national infrastructure; and providing the environment and the context and the conditions under which industry and the sector can cooperate and get business,” Chaudry said. “The only way we do this is through dialogue and consultation with international national institutions such as the U.N., the G7, G20, and making sure that we have a whole-of-government approach.”

He observed that if regulatory frameworks were left to the industry, they would be a one-page document, whereas if the government did not involve commercial players, a 1,000-page document. “It needs to be a conversation that we as government understand where the challenges, limitations, and issues are from an industry perspective, and work that through.”

Pablo Recalt, head of Satellite Commission for CABASE said that more than 90 percent of the satellite ecosystem in Argentina participates in CABASE.

Recalt said one important issue the organization is working on is a single point of interchange connecting satellite providers. This proposed service would allow a local point of access to exchange between traffic services like mobile and fixed satellite service, gateways for Earth observation, GNSS and Non-Geostationary (NGSO) traffic.

“The connections between the members may be permanent or temporary, between one to all, according to the needs and the dynamics of the market,” Recalt said. “Connections will be requested by interested members and executed by the technical manager designated by CABASE. This includes developments, new satellites, new ventures, etc.”

This programming was part of the SATELLITE End User Digital Forum, available exclusively to SATELLITE group members. On May 18, SATELLITE will host the panel: Enterprise Satellite Connectivity End-Users: How LEO, MEO, GEO and the Cloud Combine to Create Powerful Business Solutions. Learn more about digital forums and the membership.