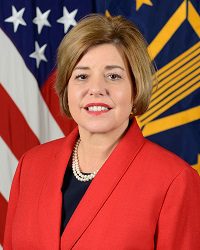 She succeeds Jeff Shockey, who departed the company in July. Mike Manazir, who has served as Shockey’s interim replacement, will return to his role as vice president of Boeing Global Services business development.

Grant will begin in her new role at Boeing in Arlington, Virginia on November 8. Her title will be vice president of Business Development and she will report directly to Boeing Defense, Space & Security CEO Leanne Caret and Boeing Global Services President and CEO Ted Colbert.

She currently oversees and executes U.S. Department of Defense security cooperation programs and activities. She began her career at the Pentagon in 1989 and held key roles with the departments of the Navy and Air Force, Office of the Secretary of Defense, the Joint Staff and two combatant commands with assignments from base to headquarters levels, including an overseas assignment.