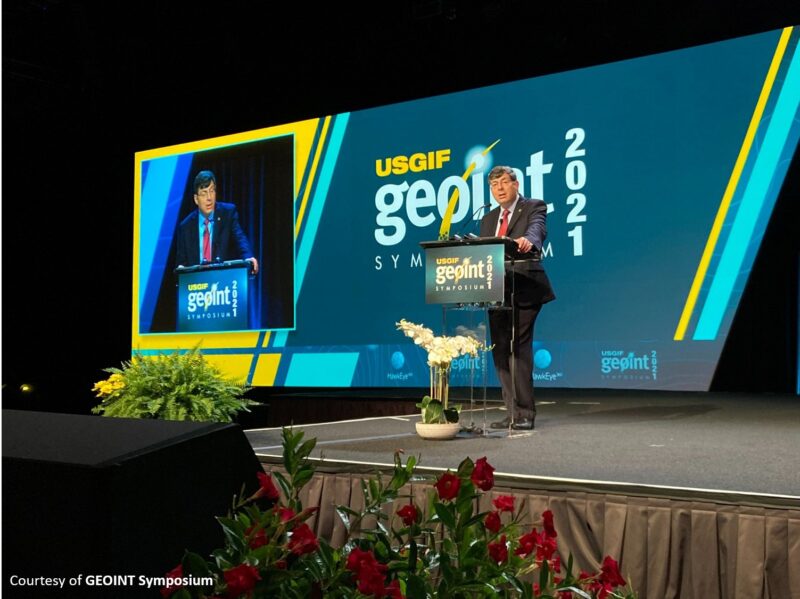 ST. LOUIS — The U.S. agency that has spent its 60 years developing exquisite satellite systems to provide intelligence, surveillance, and reconnaissance for government needs said on Thursday it will shortly begin a new procurement effort designed to quickly assess and take advantage of commercial capabilities to meet needs and inform requirements.

The Broad Agency Announcement Framework for Strategic Commercial Enhancements “is a flexible approach to an acquisition process that will allow us to evaluate, deliver and even integrate new and emerging technologies and phenomenology like radar, hyperspectral and RF [Radio Frequency] sensing as they become available,” Christopher Scolese, director of the Defense Department’s National Reconnaissance Office (NRO), said during the GEOINT 2021 Symposium in St. Louis, Missouri.

Scolese said the NRO is preparing the BAA’s first focus area, which will be commercial radar. The BAA will open up to additional phenomenology in the coming months, including hyperspectral, RF sensing and others, he said.

“We’re going to need all of those capabilities based on our plans for the future,” he said.

The forthcoming BAA, which Scolese expects to be released in the next month or so. It will be open across the industry, including foreign-owned U.S. companies. Using a BAA mechanism allow NRO to award contracts immediately, Scolese said.

The traditional acquisition approach that NRO has followed typically takes five to 10 years to go from concept to delivery, a timeline that needs to shrink dramatically, Scolese said. The agency has already begun to demonstrate it can shorten these timelines, he said.

The NRO in 2020 put in orbit two satellite systems that the agency’s Commercial Systems Program Office took from concept to orbit in less than three years, on schedule and within budget, Scolese said. He couldn’t disclose the programs but said they involved “commercial components and processes and government sponsored capabilities.”

The satellites have supported earthquake relief in Haiti, the evacuation of U.S. citizens and partners from Afghanistan, “provided insight into areas of North Korea where we’ve struggled to collect in the past,” he said.

The goal is to speed timelines from concept to products even faster and the new BAA is a step in this direction, Scolese said.

The NRO, like other members of the intelligence community, is taking advantage of a burgeoning commercial space industry that is rapidly introducing a wide range of new satellite systems and related imagery and analytical products to meet various government and industry needs, and to open new markets.

Scolese said that the NRO in the past several years has awarded a number of commercial contracts worth hundreds of millions of dollars annually and that provide about 100 million square miles of commercial imagery weekly.

“For anyone who’s been around the NRO long enough, the fact we’re sharing this much information in public is probably a big surprise,” Scolese said. He called said it an “unprecedented” period where the commercial sector represents incredible opportunities for launch, production systems, applicable processes, and commercially provided data.

Scolese also touched on a competitive effort for next-generation electro-optical imaging. The draft request for proposal went out in June and awards are expected early in 2022, he said.

“We’re so committed to creative thinking when it comes to our partners and our process, that those contracts even include pricing incentives for innovation and rewards for the development of new capabilities,” he said.

Areas where the NRO would like help from industry include artificial intelligence and machine learning (AI/ML), reduced processing costs, improvements in low-power computer systems for satellites, quantum technologies, and more reliable communication systems that are immune to disruption, Scolese said.

Two areas where NRO would like help with AI/ML include getting the right information from space immediately to the users, whether a warfighter or firefighter. These capabilities are currently being demonstrated, he said in response to a question, through work with the National Geospatial-Intelligence Agency but the NRO wants to go beyond demonstrations and deliver through its network. The second area is fusing different types of satellite data on the ground to get to a multi-intelligence capability to enable tip and cue, he said.